Ridin' with Biden? Clinton Challenge a Rough Road for the VP
Advertisement 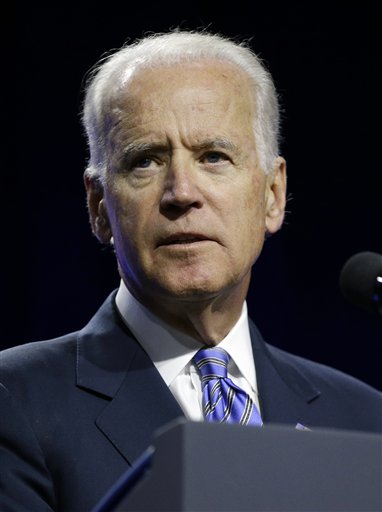 Biden runs across the street from a campaign stop to meet students outside two schools in Muscatine, Iowa. (AP Photo)

MINNEAPOLIS (AP) — The only trace of the vice president came on a candy wrapper.

Joe Biden may be considering whether to enter the race for president, but he sat out this past week’s meeting of the Democratic National Committee. In his place, backers greeted a curious few in a hotel suite 20 floors above the official gathering, handing out chocolate bars wrapped with a stylized photo of Biden behind the wheel of a convertible and an “I’m Ridin’ with Biden” label.

In any other year, a sitting vice president would have headlined such a meeting as the heavy favorite for the party’s nomination. Instead, the gathering served as proof that if Biden choses to run, he’ll do so as an underdog to Hillary Rodham Clinton.

Clinton’s years-long flirtation with a second White House campaign — time her allies used to lock up support of much of the Democratic Party’s leadership — and her undeniable political celebrity have upended the traditional script. Rather than inheriting his party’s machine, a Biden campaign would have to find a way to take it back.

“Secretary Clinton’s folks have been talking to these people for a very, very long time,” said Vermont Sen. Bernie Sanders, whose vibrant crowds and steady poll numbers make him Clinton’s strongest current challenger. “So she has a huge advantage.”

Yet Biden’s supporters see an opening, due in no small part to Clinton’s inability to shake questions about her use of a personal email server while serving as secretary of state. His candor, long history of fighting for Democratic causes and personal struggles — a widower at a young age now grieving over the recent death of his son Beau — make him an admired figure in the party.

“He’s one of us. He gets it,” said Jon Cooper, a supporter who this summer began working with a group encouraging Biden to enter the race. “Everybody likes Joe Biden.”

That group, a super PAC named Draft Biden, is a blend of Chicago-based fans of the vice president and political operatives with ties to his family. It sent five employees to the DNC meeting, emailing attendees and passing out fliers in hallways to invite people to their pro-Biden hotel suite.

A total of about 75 came to four open house sessions, said Josh Alcorn, a former aide to Beau Biden who joined the group with the family’s blessing.

“People seemed excited about the possibility and were willing to take a look,” he said.

Some Democrats who heard the pitch asked to stay in touch. Others remained skeptical.

“I asked them, ‘What’s his path?'” said Mitchell Ceasar, a Florida attorney and party operative. Their answer — that he could cobble together votes from all sorts of Democratic coalitions — prompted a shrug.

The practicalities of running also remain difficult for the vice president. His supporters say he must decide before the first Democratic debate, in mid-October.

While Biden has no campaign operation beyond the small Draft Biden group, Clinton has for months built a sprawling machine of hundreds of employees working out of her Brooklyn campaign headquarters and in dozens of offices across the country. Her version of Draft Biden, a since shuttered outside group called Ready for Hillary, spent years before Clinton got into the race amassing millions of email addresses of potential supporters.

Money is another challenge. Biden represented the small state of Delaware in the Senate and has never raised significant sums for his own campaigns. Draft Biden, just a few months old, raised less than $100,000 through the end of June. While supporters say bigger checks have been rolling in recently, Clinton is a former first lady and senator from New York with a strong fundraising history. In the first three months of her campaign, she raised $45 million for the primary contest alone.

Clinton’s team has also devoted significant resources already to wooing super delegates — the party and elected officials empowered to select the presidential nominee at the Democratic national convention regardless of the 2016 primaries.

Clinton backers, who sported gold “H” lapel pins at the DNC meetings, were rewarded for their loyalty with invitations to private briefings from Clinton and top campaign officials.

Several hundred Democratic delegates who signed cards pledging to support her mingled atop a skyscraper in downtown Minneapolis Thursday night. Clinton talked for about 15 minutes, drawing cheers when she assured them, “I’m not a quitter.”

Ed Cote, a Washington state Democratic leader and a Clinton admirer, said that event was a perfect example of why Biden would find himself in a tougher primary than a sitting vice president might expect.

“Most of the people there have votes on the first ballots, and they’re solidly with her,” Cote said. “She’s doing exactly what she needs to be doing.”

Clinton learned the importance of that support in 2008, when she ended her long, hard-fought primary campaign after it became clear she lacked enough delegates to capture the nomination.

“We are working really hard to lock in as many supporters as possible,” Clinton said Friday. “This is really about how you put the numbers together to secure the nomination.”