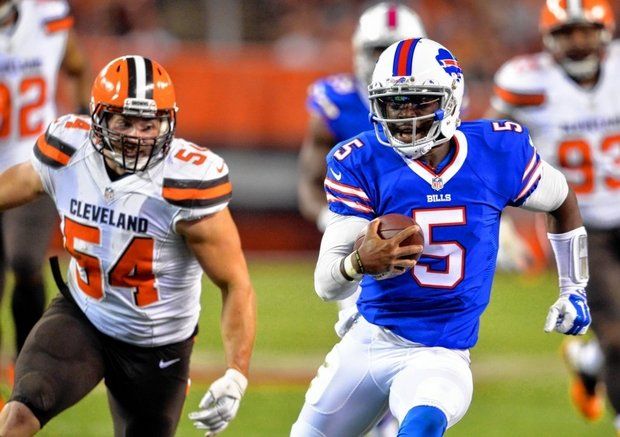 Buffalo Bills quarterback Tyrod Taylor (5) runs for a first down in the second quarter against the Cleveland Browns on Thursday, August 20, 2015 in Cleveland. (David Richard/Associated Press)

Ryan gave all three quarterbacks a fair shot to win the starting job, on that point there was no debate. And ultimately, he was true to his word in that it would be a true competition, may the best man win.

The best man turned out to be Tyrod Taylor, who was probably the third choice back in the spring when this all began, but clearly was the best candidate ahead of Matt Cassel and EJ Manuel by the time the third preseason game was complete Saturday.

“I think that the decision, as I mentioned, was going to be tough because all three guys did a tremendous job for us,” Ryan said. “It came down to basically that explosiveness that Tyrod brings to us. I think he has a great grasp of our system and again, it certainly wasn’t an easy decision, all three guys made it difficult.”

Donald Young Comes From Behind by Not Looking Back