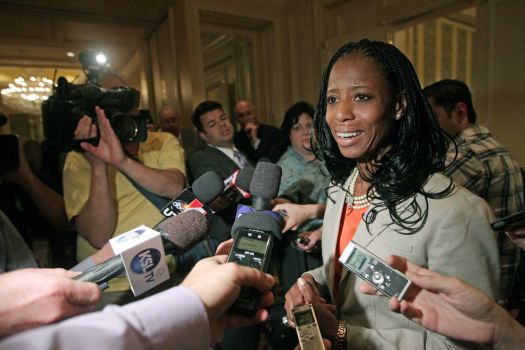 (Reuters) – Utah’s Mia Love, a Republican darling who could become the first conservative black woman elected to U.S. Congress, is getting a second, and likely better, chance to make history after narrowly losing to a popular incumbent Democrat in 2012.

Love, 39, is a Mormon mother of three who is upending stereotypes about the state and its predominant faith. She locked up her party’s nomination to vie for an open seat in Utah’s 4th District at a state convention last month with an overwhelming 78 percent of the vote.

The seat became available when Jim Matheson retired after seven terms in Congress as the heavily conservative state’s lone Democrat in Washington. Two years ago, the politically savvy son of a beloved Utah governor beat Love by fewer than 800 votes.

If Love wins this time, she would become an unlikely champion in Washington of staunchly conservative views – limited government, fiscal discipline and state’s rights. The daughter of Haitian immigrants is pro-life, pro-gun and holds a concealed weapons permit.