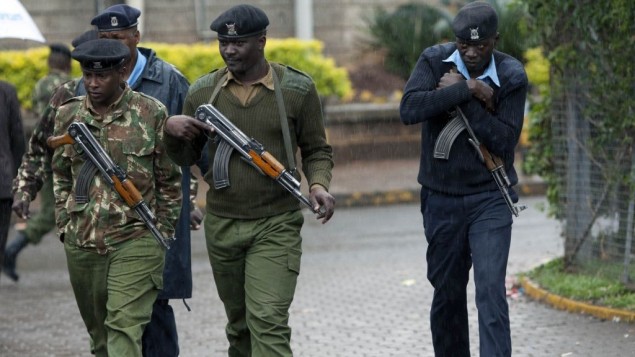 Kenyan school pupils and activists challenge riot police during a protest against the removal of their school’s playground, at the Langata Road Primary School, in Nairobi, Kenya Monday, Jan. 19, 2015. (AP Photo/Brian Inganga)

NAIROBI, Kenya (AP) — Kenyan police have carried out extra-judicial killings, torture and forced disappearances of suspected extremists, according to allegations in a new report by a Kenyan rights organization.

The Kenya National Commission on Human Rights, which is funded by the government, alleges that at least 25 extra-judicial killings and 81 forced disappearances were perpetrated by the Kenyan police, according to the report that was released Tuesday.

The report cites water boarding, electric shocks, genital mutilation, exposure to extreme cold or heat, hanging on trees, mock executions and exposure to stinging by ants in the wild as some of the torture methods used by the police.

“The Kenya security agencies have continued to conduct abusive operations against individuals and groups suspected to be associated with terror attacks in the various parts of the country,” the report says.

The report has accounts by the alleged victims. It states that the “profiling of people along ethnic or religious lines constitute discrimination and is therefore unconstitutional and against international norms.”

Kenyan police have not immediately responded to the allegations in the report, but they usually deny persistent reports of mistreatment of suspected Islamic extremists.

Kenya has been attacked many times by the al-Qaida-linked Somali rebel group al-Shabab, which opposes the country’s decision in 2011 to send troops to fight the Islamic extremist group as part of the African Union force backing Somali’s weak federal government.

In September 2013, at least 67 people were killed in an attack by al-Shabab on the Westgate mall in the Kenyan capital of Nairobi.

In April, the group claimed responsibility for an attack on a college campus in northeastern Kenya that left at least 148 people dead.