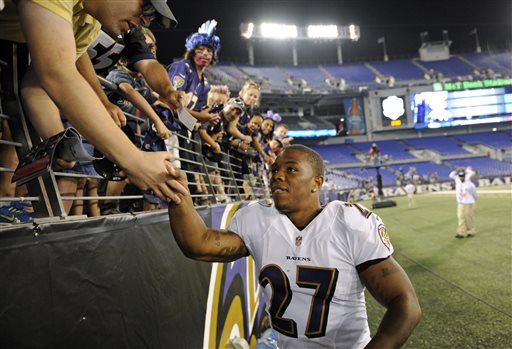 In this Aug. 7, 2014, file photo, Baltimore Ravens running back Ray Rice acknowledges fans as he walks off the field after an NFL preseason football game against the San Francisco 49ers in Baltimore. Rice was let go by the Ravens on Monday, Sept. 8, 2014, and suspended indefinitely by the NFL after a video was released that appears to show the running back striking his then-fiancee in February. (AP Photo/Nick Wass, File)

Restaurants are offering free pizza in exchange for Rice jerseys, several fans are saying good riddance to the scorned running back and on the field the Ravens are turning to unproven players to fill the void.

Much has changed in Baltimore since an explicit video surfaced showing Rice striking his then-fiancee in an elevator.

The Ravens said on Twitter that they’re planning to offer an exchange for Rice jerseys, and several stores are clearing their shelves of Rice memorabilia that once was a best seller. One local tavern offered a $10 bar tab in exchange for a No. 27 Rice jersey.

Once a fan favorite in Charm City, Rice is now a pariah.

“He got what he deserved,” 49-year-old Baltimore native Kim Hufman said Tuesday. “I have his jersey, it’s the only Ravens jersey I have, and I’ll never wear it again.”

The Ravens are also moving on without Rice. With Rice out of the picture, the top three running backs on the depth chart have a combined two NFL starts since 2010.

“Obviously it’s a little different not having Ray here and realizing we’re not going to have him here,” quarterback Joe Flacco said. “Having said that, we have to move on.”

Baltimore entered the season thinking it would be without Rice for only two games, the length of his original suspension by the NFL for domestic violence.

Now that he is not coming back, the Ravens are focusing on playing the entire season without the three-time Pro Bowler and franchise leader in yards from scrimmage.

“We lost one of our best players here, and he was a great Raven,” wide receiver Torrey Smith said. “It feels weird to even say that. It’s way worse for him than it is for us. We just have to get ready for the next one.”

Flacco said: “Obviously it doesn’t paint a good picture of who Ray is as a person. Sometimes good people make bad decisions and put themselves in a bad light. Really, my heart just goes out to him and his family. As far as us, we’ve got a big game this week.”

The Ravens will face their most hated rivals, the Pittsburgh Steelers, on Thursday night. Coach John Harbaugh has not named his starting running back, in part, perhaps, because there’s not much to choose from.

Bernard Pierce made his second NFL start Sunday in a season-opening 23-16 loss to Cincinnati and was benched after losing a fumble. Justin Forsett gained 70 yards, nearly twice the 31 yards he had on the ground all last season with Jacksonville. Rookie Lorenzo Taliaferro didn’t carry the ball but caught one pass for no yards.

“We have the guys that we have,” Harbaugh said, hardly a ringing endorsement for the current stable of running backs.

Flacco threw a career-high tying 62 passes Sunday, mostly because he got little support from the running game.

“Last week obviously wasn’t a great example of what we’re going to be doing all year,” Flacco said. “But we have total confidence in our running backs and our line.”

A day after the Ravens cut Rice, some fans remained stunned by the move. Although no one defended Rice’s actions, some wondered about the severity of the penalty.

“I’m torn, I really am,” said 60-year-old Alexander Doose, who was wearing a Ray Lewis jersey. “I think it’s wrong that he got fired. He should have been suspended for six games, they should have taken money away from him, made him go to counseling forever. But they took away his livelihood. He’ll never find work again.”

Lewis was one of the Ravens’ all-time great players. The linebacker returned to enjoy a sensational career with Baltimore after being charged in a murder case in January 2000, and last week the Ravens unveiled a statue of him outside their home stadium.

There are not likely to be any statues honoring Rice.

“Ray Lewis is 10 times better than Ray Rice,” said Curtis Spoon, who was walking through the streets of Baltimore in a Jamal Lewis jersey. “Rice isn’t a superstar. He’s barely even a star. And he did all this right on a public elevator? It’s all too crazy.”

AP Writer Juliet Linderman in Baltimore contributed to this report.