Ranking US States by Job Creation in Past 5 Years
Advertisement 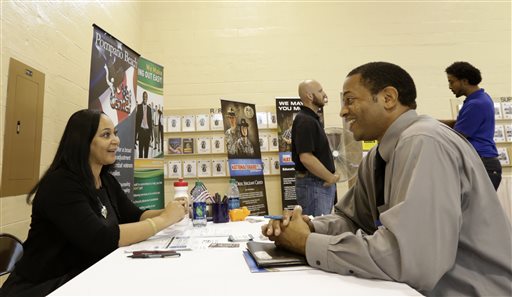 WASHINGTON (AP) — Since the Great Recession officially ended in June 2009, the U.S. economy has generated 7.8 million jobs. But the gains haven’t been spread evenly across the country.

Some states have boomed. Others have struggled to add jobs.

North Dakota, benefiting from an oil and gas drilling boom, has created nearly 98,000 jobs over the past five years, a 27 percent increase — by far the best in the country. New Mexico, hard hit by federal spending cuts, is the only state that has lost jobs since the recession ended.

State performance in job creation defies political categories. The big winners over the past five years include Republican-dominated red states such as Texas and Democratic-dominated blue ones such as California. Likewise, the laggards include red (Alabama, Arkansas) and blue (New Jersey, New Mexico) states.

The Labor Department released job figures for June on Friday, allowing an assessment of how states have done in this economic recovery.

Compared to May, 33 states added jobs and 17 lost them last month. The unemployment rate dropped in 22 states from May to June, rose in 14 and stayed the same in 14.

Mississippi and Rhode Island have the nation’s highest unemployment rates, both at 7.9 percent. North Dakota has the lowest rate, at 2.7 percent.

The Great Recession, harshest since the 1930s, began in December 2007 and ended in June 2009. Most states still don’t have as many jobs as they had when the recession started. All but New Mexico have more than they did when it ended five years ago.

A list showing how the 50 states and Washington D.C. stack up in job creation between June 2009 and June 2014, ranked from fastest to slowest growth in hiring:

US Unemployment Aid Applications Drop to 302,000