Questions Rising over Who's in Charge of Protests
Advertisement 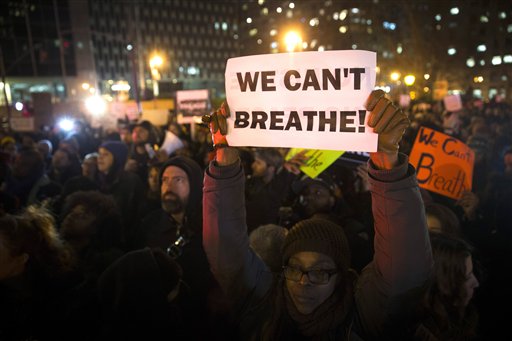 In this Dec. 4, 2014 file photo, demonstrators participate in a rally against a grand jury’s decision not to indict the police officer involved in the death of Eric Garner, in New York. (AP Photo/John Minchillo, File)

WASHINGTON (AP) — Who, if anyone, is leading the emerging movement around the deaths of Michael Brown and Eric Garner — younger activists or legacy civil rights groups?

Established civil rights organizations — the National Action Network, the NAACP, the National Urban League — last week called for people to gather in Washington Saturday for a national march with the families of the two unarmed black men who died at the hands of white police officers. Grand juries declined to indict the officers.

In the past, calls like that would have brought activists from around the nation to the capital. But groups like Ferguson Action are instead sponsoring their own actions in cities around the nation, calling for a “National Day of Resistance” in such places as Sioux Falls, South Dakota; Bloomington, Indiana, and Bend, Oregon.

“There are many ways to take action in this impactful moment,” said Phil Agnew, executive director of the group Dream Defenders. “This Saturday we will be where we have been, and will continue to be — building a movement in the streets of our communities.”

“There are young people on the street — and not just young people — who don’t belong and don’t want to belong to any particular organization, and so we want to make sure those folks have a way to plug in as well,” he said. “We all have the same vision, and want to be able to coordinate with any group that wants to work toward that vision.”

It’s about getting results, not about “turf,” who’s in charge or who gets to stand before a microphone, said Marc Morial, president of the National Urban League.

“Some of us have been at this for a long time,” Morial said. “And it’s our work and we work on these issues all the time. There’s a new spark and I welcome the involvement of broad cross sections of Americans for whom perhaps the disparities in the justice system were not on the top of their consciousness before these incidents occurred.”

Rev. Lennox Yearwood Jr., president of the Hip Hop Caucus, plans to attend both the New York City and the Washington marches. “The young people in the movement need to be respected as leaders and I think there’s some pushback against not being included in the decision-making process before these marches are being held,” he said.

Each side needs to see the value of the other, he said. Younger groups need to understand “the issue of ‘black lives matter’ did not just start six months ago. It’s been going on for quite some time.” At the same time, he said the legacy organizations need to understand there are new ideas and a new energy that’s decentralized from the nation’s power centers.

These are the kind of growing pains that all movements go through, said Barbara Arnwine, leader of the Lawyers’ Committee for Civil Rights Under Law. Some of the older and newer groups met in Washington for a face-to-face on Thursday, and while there were some harsh words exchanged between groups, Arnwine said that was to be expected at this early point.

“There’s a need for more discussion on how to proceed between the younger movements and the established groups,” Arnwine said. “It’s a tough space for everybody because everything is happening really quickly, everyone’s underresourced tremendously and everyone’s under a lot a stress. So it’s a very, very tough time.”

Even though they’re working toward the same goal, there’s a generational divide between the younger groups and the establishment civil rights groups, said Laura Murphy of the American Civil Liberties Union. And it can be good to have younger energy pushing and testing boundaries with the older groups, she said.

For example, she said it was younger immigration activists — the “dreamers” — and not the established groups that caused the White House to give deportation protection to nearly 5 million immigrants living here illegally.

“If the tactics of the traditional civil rights organizations were working, it’d be different, but things aren’t working for anyone,” Murphy said. “Every segment of the black community and the civil rights community has to come together. And if there’s conflict, it can be worked through. We have to work together to bridge the divides, because this is a big issue with impact on every aspect of the lives of people of color.”