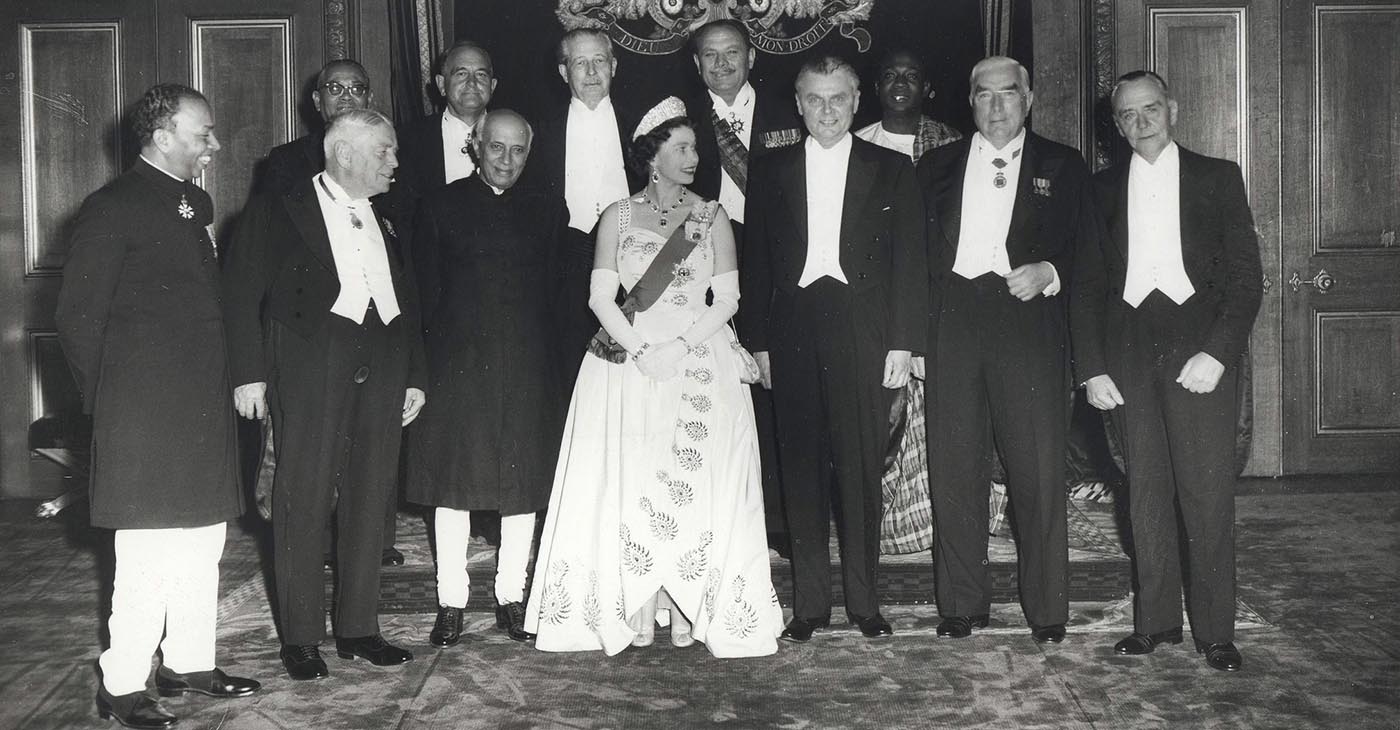 “Journalists are tasked with putting legacies into full context, so it is entirely appropriate to examine the queen and her role in the devastating impact of continued colonialism,” Hill tweeted.

Elizabeth’s legacy isn’t necessarily complicated, but filled with enough ambiguity and action and inaction, that it might be easy to understand why people of color might view her different that the adoring throng mourning outside of Buckingham Palace.

The longest-reigning British monarch’s history on race will forever exist as part of her legacy.

“Reminder that Queen Elizabeth is not a remnant of colonial times. She was an active participant in colonialism. She actively tried to stop independence movements and keep newly independent colonies from leaving the Commonwealth. The evil she did was enough,” Twitter user @YaaAsantewaaBa wrote.

While her role in colonialism and its devastating impact on Black people continue to gnaw at many, the latest generation had an up-close view into the Queen’s relationship with her mixed-race daughter-in-law Meghan Markle.

“A low point was when [Prince] Harry was asked by a family member ‘how dark Archie’s skin might be,” Markle told Oprah Winfrey in a 2021 interview.

Archie is Markle and Harry’s son.

Markle revealed that she began having suicidal thoughts while pregnant with Archie in early 2019.

“I just didn’t want to be alive anymore,” Markle told Winfrey. “And that was a very clear and real and frightening constant thought.”

Harry expressed frustration over the lack of family support when British media members and others launched racially motivated insults at Markle.

“For us, for this union and the specifics around her race, there was an opportunity – many opportunities – for my family to show some public support,” Harry stated during the same interview.

“And I guess one of the most telling parts and the saddest parts, I guess, was over 70 female members of Parliament, both Conservative and Labor, came out and called out the colonial undertones of articles and headlines written about Meghan. Yet no one from my family ever said anything. That hurts.”

Earlier, many in Great Britain and around the globe called on the Queen to deal with the fallout over complaints that Buckingham Palace had no official response to the murder of George Floyd and the global Black Lives Matter Movement.

However, the palace offered only tepid responses.

Before and during Elizabeth’s reign, journalists claimed the royal family looked the other way – and even enabled – racism.

“These incidents aren’t just historical — royal family members have been ignoring accusations of racism since as recently as June 2020, when the Queen failed to respond to accusations that the royal honors medal is ‘highly offensive’ and resembles the killing of Floyd,” Royal Insiders Mikhaila Friel and Rachel Hosie wrote in 2021.

“It’s hard to imagine the Queen showing support for BLM — and anti-racism in general — when in her 69 years on the throne, she has failed to address the racism that undeniably exists in the institution of the royal family,” the duo concluded.

Further, a 2021 exposé in The Guardian revealed documents that shed light on Elizabeth’s continued exemption from race and sex discrimination laws.

Investigative journalists David Pegg and Rob Evans said they discovered papers at the National Archives as part of an ongoing investigation into the royal family’s use of an arcane parliamentary procedure, known as Queen’s consent, to influence the content of British laws secretly.

“They reveal how the Queen’s chief financial officer once informed civil servants that “it was not, in fact, the practice to appoint colored immigrants or foreigners” to clerical roles in the royal household, although they were permitted to work as domestic servants.

Pegg and Evans wrote that the Queen had remained exempted from equality laws for more than four decades.

“The exemption has made it impossible for women or people from ethnic minorities working for her household to complain to the courts if they believe they have been discriminated against,” the journalists found.

Instead, officials offered without explanation that there’s a separate process for hearing discrimination complaints.

In 2020, when Antigua and Barbuda marked 40 years of independence from Britain, calls grew louder for slavery reparations.

Frustration with the Queen and colonialism also grew palpable.

“I think most Antiguans would want to replace the Queen now,” historian Ivor Ford told BBC News during the celebration.

“Young people can’t relate to the Royal Family; they don’t understand their purpose. Even older people like me would love to see us become a republic. The head of state should be someone who is elected like in America,” Ford concluded.

Antiguan businesswoman Makeda Mikael recalled how as a child, she attended ceremonies that celebrated the Queen against her will.

“We didn’t know as much about our history then as we do now,” Mikael related.

“In school, I wasn’t taught African or Caribbean history. So I knew everything about British and European history and nothing about ours.”

She told the BBC she and others would continue to demand reparations.

“England has enjoyed the benefit of our slave labor right up to today, and they need to be honest, admit it, and find a way to reconcile,” Mikael insisted.

“Most people couldn’t care less if [Elizabeth] is head of state or not. The Queen is not a significant part of anybody’s agenda.”

With a reported net worth of nearly $12 billion, Elizabeth has never publicly spoken about reparations.

“Along with a number of colonies in North America, the Caribbean formed the heart of England’s first overseas empire,” explained David Lambert, professor of Caribbean History at the University of Warwick.

Lambert also authored White Creole Culture, Politics and Identity During the Age of Abolition, and Mastering the Niger: James MacQueen’s African Geography and the Struggle over Atlantic Slavery.

In a white paper for the British Library, Lambert explained that from the early 17th century, people from other European powers, including France and England, settled in the Caribbean.

“Around the same time, France established colonies in Martinique and Guadeloupe. In this way, the Caribbean came under the control of many competing European countries, joining Spain, which had established its first colonies in the region more than a hundred years before.”

Further, Lambert noted that the system of slavery saw its dismantling in the early 19th century, and the enslaved received freedom in the British Caribbean in the 1830s.

A system called “Apprenticeship was put in place from 1834 to 1838 across most of the Caribbean,” Lambert offered further.

“This was intended to provide a transition to freedom for the formerly enslaved people and the planters who relied on their labor. Even after Apprenticeship was ended, things remained very unequal.”

Her father, Prince Albert, was the youngest son of King George V, and Albert’s place in the family presumably gave Elizabeth little chance to ascend to the throne.

However, in a stunning move, Albert’s brother, King Edward VIII, abdicated the throne in 1936 to marry an American woman, which allowed for Albert’s ascension as King George VI – thus making Elizabeth heir to the throne.

The former Prince Philip of Greece and Denmark, Philip then took the titles of Duke of Edinburgh, Earl of Merioneth, and Baron Greenwich.

On Feb. 6, 1952, King George VI died after a months-long illness, and Elizabeth became Queen – though her coronation took place more than a year later at Westminster Abbey.

With Elizabeth’s death, Charles became the first King since his grandfather’s death more than 70 years ago.

“Michelle and I were lucky enough to come to know Her Majesty, and she meant a great deal to us,” former President Barack Obama said in a statement.

“Back when we were just beginning to navigate life as President and First Lady, she welcomed us to the world stage with open arms and extraordinary generosity. Time and again, we were struck by her warmth, how she put people at ease and brought her considerable humor and charm to moments of great pomp and circumstance.”

President Joe Biden said Elizabeth had a steadying presence and a source of comfort and pride for generations of Britons, including many who have never known their country without her.

“An enduring admiration for Queen Elizabeth II united people across the Commonwealth. The seven decades of her history-making reign bore witness to an age of unprecedented human advancement and the forward march of human dignity,” Biden stated.

“In the years ahead, we look forward to continuing a close friendship with The King and The Queen Consort. Today, the thoughts and prayers of people across the United States are with the people of the United Kingdom and the Commonwealth in their grief.

“We send our deepest condolences to the Royal Family, who are not only mourning their Queen, but their dear mother, grandmother, and great-grandmother. Her legacy will loom large in the pages of British history and the story of our world.”