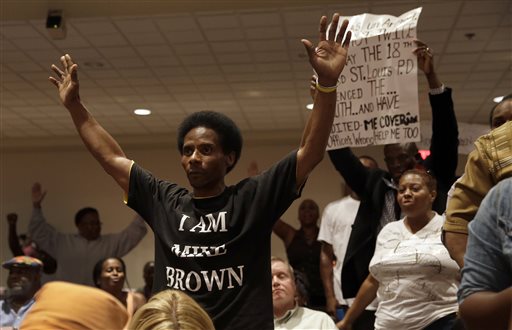 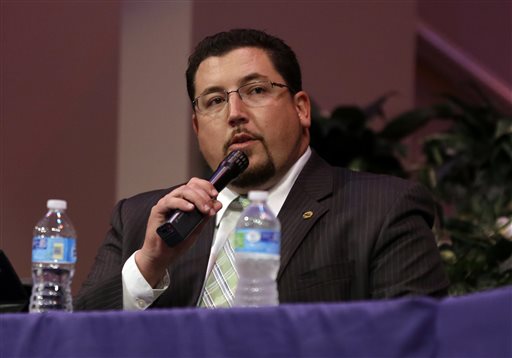 Ferguson Mayor James Knowles speaks during a meeting of the Ferguson City Council Tuesday, Sept. 9, 2014, in Ferguson, Mo. The meeting is the first for the city council since the fatal shooting of Michael Brown by a city police officer. (AP Photo/Jeff Roberson)

FERGUSON, Mo. (AP) — Elected leaders in the St. Louis suburb where an unarmed black 18-year-old was fatally shot by a white police officer hoped to use their first public meeting since Michael Brown’s death as a chance to promote community healing.

Instead, they were greeted Tuesday night with anger, outrage and warnings of voter retribution at the ballot box. Proposals to overhaul the municipal courts and create a citizen police review board were greeted warily, if not with outright skepticism.

“You’ve lost your authority to govern this community,” said St. Louis activist John Chasnoff. “You’re going to have to step aside peacefully if this community is going to heal.”

The shooting last month exposed an undercurrent of racial unrest in Ferguson and other mostly black communities of north St. Louis County, and prompted days of sometimes violent protests.

Officials have pledged to boost minority hiring in Ferguson’s 53-person police force, which has just three black officers, and to meet informally in city neighborhoods to promote a public dialogue.

But within minutes of the start of the City Council meeting, where the proposals were briefly discussed, several demonstrators stood up and shouted as the council tried to cover some routine business. Later, others stood and chanted, “Shut it down!” while raising their hands in the air. Several witnesses say Brown raised his hands as officer Darren Wilson shot him.

The first person to take the microphone during the public comment period said he was there for the mayor’s job. It was a theme echoed throughout, as speaker after speaker expressed doubt about planned reforms — and anger at the government officials on the stage.

“I heard the mayor say Ferguson doesn’t have a race problem,” said Taurean Russell, 30. “There must be two Fergusons.”

In the last fiscal year, court fines and fees accounted for $2.6 million, or nearly one-fifth of the city budget. That’s nearly twice as much as the city collected two years earlier.

The meeting, exactly one month after Brown’s death, was held in a local church to accommodate several hundred attendees who had to walk through metal detectors at police-guarded entrances.

Several speakers reiterated plans to block Interstate 70 in Ferguson on Wednesday in an act of civil disobedience. Organizers say they want to bring rush-hour traffic to a standstill.

The U.S. Justice Department announced last week that it was launching a broad investigation into the Ferguson Police Department, looking for patterns of discrimination.

Ferguson, a city of 21,000, is about 70 percent black. The mayor and five of the six City Council members are white. A 2013 report by the Missouri attorney general’s office found that Ferguson police stopped and arrested black drivers nearly twice as often as white motorists, but were less likely to find contraband among the black drivers.

Police have said the shooting of Brown followed a scuffle after Wilson told Brown and a friend to move out of the street and onto a sidewalk. Autopsies concluded Brown was shot at least six times.