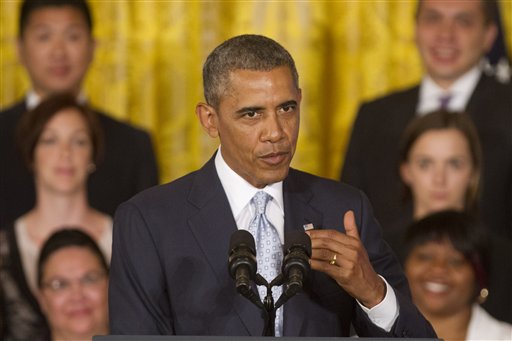 President Barack Obama gestures as he speaks in the East Room of the White House in Washington, Monday, June 9, 2014, before signing a Presidential Memorandum on reducing the burden of student loan debt. (AP Photo/Jacquelyn Martin)

WASHINGNTON (NNPA) – From 2003 to 2014, student debt in America skyrocketed from $250 million to $1.2 trillion, surpassing credit card debt. As more students, especially Blacks students, rely on grants and loans to get through college, President Barack Obama has stepped up with a series of executive orders to ease the pain of borrowers in college and after they graduate.

A 2012 study by the Center for American Progress, said that 81 percent of Blacks who earned bachelor’s degrees graduated with debt compared to 64 percent of White students.

According to the CAP report, “African Americans, are graduating with more student debt: 27 percent of black bachelor’s degree recipients had more than $30,500 in debt compared to 16 per­cent for their White counterparts.”

Fifty-six percent of Blacks aged 18 to 34, saddled with debt, post-poned buying a home, because of the ailing economy.

There’s no denying the impact of a college education on the lifetime earnings of a graduate.

“The median annual earnings among recipients of a Bachelor’s degree or higher (age 25 and over) with full-time work was $62,300 in 2013, or $28,300 more than their counterparts with only a high school diploma,” stated the report.

Unemployment rates for young Black college graduates are also significantly lower than the jobless rates for Blacks that only finished high school, 13.1 percent compared 34.7 percent, according to a 2014 report by the Economic Policy Institute, but rising tuition costs continue to imperil the dreams of millions of young Blacks.

“Over the past three decades, the average tuition at a public four-year college has more than tripled, while a typical family’s income has barely budged. More students than ever are relying on loans to pay for college,” the report explained. “Today, 71 percent of those earning a bachelor’s degree graduate with debt, which averages $29,400. While most students are able to repay their loans, many feel burdened by debt, especially as they seek to start a family, buy a home, launch a business, or save for retirement.”

The report continued: “For too many low- and middle-income families this essential rung on the ladder to opportunity and advancement is slipping out of reach.”

Many Black families are unable to contribute financially to help cover college tuition, making student loan programs even more critical for those students. However, defaulting on student loans can have lasting consequences, including damaged credit ratings, garnished wages, and can even have a negative impact on future employment prospects, the report said.

Working with the Department of Education, President Obama launched the “Pay As You Earn” program that caps loan payments for students already making payments at 10 percent of their earn monthly earnings.

“This executive action is expected to help up to 5 million borrowers who may be struggling with student loans today,” the report said.

President Obama also partnered with the Department of Treasury in an effort to help Pell Grant beneficiaries learn how to claim the American Opportunity Tax Credit, an initiative started in 2009 “which provides up to $2,500 to help pay for each year of college.”

The president is also working with trade groups and businesses to increase awareness about repayment options and improve financial literacy.

Recently, Senator Elizabeth Warren (D-Mass.) has pushed a bill that would have allowed borrowers to refinance their student loans.  Earlier this month, the legislation faded in the Senate on a 56-38 vote, largely opposed by Republicans who said that the bill was an election year stunt engineered by the Democrats. The proposal would have saved students about $2,000 over the life of their loans.

President Obama’s executive actions come more than a year after some historically Black colleges and universities (HBCUs) were forced to turn students away, because of the stricter requirements for the PLUS loan program. Other Black schools furloughed faculty and staff and slashed budgets to stay afloat when enrollment tanked. The rule change disproportionately affected Black families, who suffered heavy losses during the most recent housing crisis and the recession that followed.

The president’s most recent actions may help alleviate some of the pain felt by Black students and HBCUs by the PLUS loan program rule changes.

“At a time when a college degree is so critical to the future of today’s students it has also never been more expensive,” said Cecilia Muñoz, director of the Domestic Policy Council at the White House. “So, making college more affordable is critically important, but with more than a trillion dollars in outstanding student loans, we also have to do more for people who have already borrowed for college to repay their loans.”

Mobilizing Key Groups Can Change Politics of the Deep South