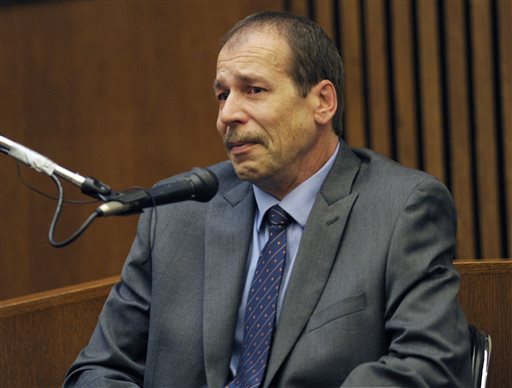 Theodore Wafer testifies in his own defense during the seventh day of testimony for the Nov. 2, 2013, killing of Renisha McBride, Monday, Aug. 4, 2014, in Detroit. He said he feared for his life when he fired at McBride on his porch in Dearborn Heights, Mich. Wafer is charged with second-degree murder and could be sentenced to up to life in prison with the chance for parole, if he’s convicted. (AP Photo/Detroit News, Clarence Tabb Jr.)

DETROIT (AP) — A suburban Detroit man said Monday that he was afraid when someone showed up on his porch before dawn one morning last year and started banging on his doors, but he wasn’t going to be a victim in his own home.

“I wasn’t going to cower in my house,” Theodore Wafer told jurors at his trial for the Nov. 2 killing of 19-year-old Renisha McBride, who was drunk but unarmed.

Wafer is charged with second-degree murder and could be sentenced to up to life in prison with the chance for parole, if he’s convicted. He says he shot McBride in self-defense, but prosecutors say Wafer could have stayed safely behind his locked doors and called 911 instead of confronting McBride, whom he didn’t know.

Wafer, 55, took the stand on the seventh day of testimony. Legal experts had speculated that he would have to testify in his own defense to convince the jury that he had a reasonable and honest fear for his life that morning.

Softly and methodically, Wafer told the Wayne County Circuit Court jury how he followed loud bangs from his front door to his side door and back to the front again before fetching his 12-gauge shotgun.

He said he opened the front door slightly and saw that the outer, screen door was damaged. He then opened the inner door further and “this person came out from the side of my house so fast. I raised the gun and shot,” he told jurors after taking the stand on the seventh day of testimony.

Wafer also said he thought there could have been more than one person outside of his 1,100-square-foot home near Detroit’s far west side. He said he pulled the trigger “to defend myself. It was them or me.”

When police arrived, McBride lay in a pool of blood just off the porch.

In the immediate aftermath of the shooting, some questioned whether race may have been a factor. Wafer is white and McBride was black, and some likened the killing to that of Florida teenager Trayvon Martin. But race faded as an issue and wasn’t mentioned as a factor by prosecutors or defense attorneys during court hearings that preceded the trial.

Earlier in the trial, prosecutors played a recording of Wafer telling an officer that he didn’t know the gun was loaded. They contend that Wafer didn’t need to use deadly force against McBride

An autopsy found McBride’s blood-alcohol level was about 0.22, which is nearly three times Michigan’s legal limit for driving. About 3½ hours before Wafer killed her, McBride crashed her car into a parked vehicle on a Detroit street about half away.

Occasionally rubbing the right side of his head and speaking with his eyes closed, Wafer testified that he couldn’t afford to install a security system at his home, so he bought the shotgun about six years ago to help him defend it. Wafer also said the neighborhood had changed greatly since he bought the house in 1994.

Earlier Monday, a firearms expert testified for the defense that Wafer and McBride were both apparently standing close to his screen door when he shot her through it, killing her.

“My opinion is she was very close to the door … within a foot,” Balash told the jury.

It is not clear how or why she showed up on Wafer’s porch. They didn’t know each other.

Prosecutors played a Wafer’s videotaped interview with police after the shooting before ending testimony Monday afternoon. He is expected back on the stand Tuesday morning.

Alabama State University Under Fire; So is President Boyd