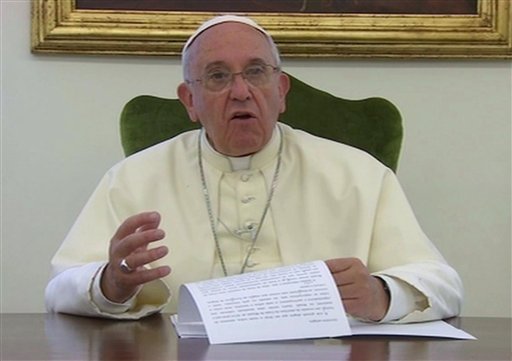 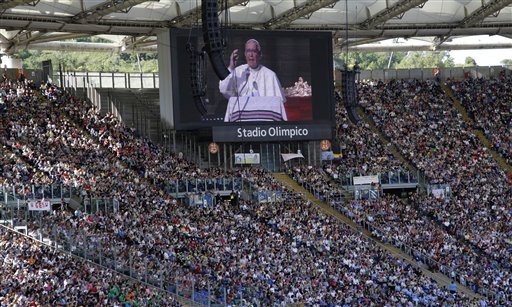 In this photo taken on Sunday, June 1, 2014, the image of Pope Francis is projected on a giant screen during a meeting with faithful at Rome’s Olympic stadium. Pope Francis has a message for the World Cup: Let football be a showcase for teamwork and solidarity, not an exhibition of racism and greed. (AP Photo/Gregorio Borgia)

VATICAN CITY (AP) — Pope Francis has a message for the World Cup: Let football be a showcase for teamwork and solidarity, not an exhibition of racism and greed.

The Argentine-born, football-loving pope recorded a video message that will be broadcast on Brazilian television ahead of Thursday’s opening match between Brazil and Croatia.

In it, Francis said football teaches three lessons that can promote peace and solidarity around the world: the need to train and work hard to reach goals, the importance of fair play and teamwork, and the need to respect and honor opponents.

“To win, we must overcome individualism, selfishness, all forms of racism, intolerance and manipulation of people,” he said. He said being “greedy” in football, as in life, is an obstacle.

“Let nobody turn their back on society and feel excluded!” he said. “No to segregation! No to racism!”

It’s unclear how Francis will keep track of Argentina’s progress in the World Cup. He doesn’t have a TV in the Vatican hotel room where he lives, though one could certainly be made available.

Francis, a lifelong fan of the Buenos Aires club San Lorenzo, has amassed an enormous collection of jerseys since his election and has met with many visiting teams.

Back in February, Francis joked that he might be tempted to root for Brazil after a visiting President Dilma Rousseff gave him a national team jersey signed by football great Pele and a ball signed by Ronaldo. Rousseff asked at the very least for neutrality.

In his message, Francis said he hoped the World Cup would be a “festival of solidarity between peoples.”

“Sport is not only a form of entertainment, but also — and above all I would say — a tool to communicate values that promote the good that is in humans and help build a more peaceful and fraternal society,” he said.