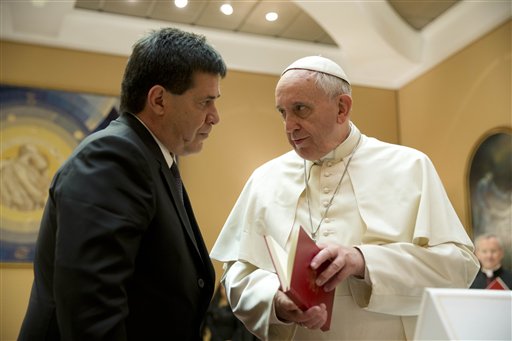 In this April 29, 2014 file photo, Pope Francis presents Paraguay’s President Horacio Cartes with the book of the gospel during a private audience at the Vatican. (AP Photo/Gregorio Borgia, Pool, File)

VATICAN CITY (AP) — Pope Francis is taking his “church for the poor” to three of South America’s poorest and most peripheral countries, making a grueling, week-long trip that will showcase the pope at his unpredictable best: speaking his native Spanish on his home turf about issues closest to his heart.

Indigenous peoples will take center stage during much of Francis’ July 5-13 visit to Ecuador, Bolivia and Paraguay, while the Francis’ own Jesuit order will be in the spotlight for its role in evangelizing the continent centuries ago and even today.

Environmental concerns in the Amazon, border conflicts and the region’s tortured history with authoritarian regimes also factor into the agenda as history’s first Latin American pope returns to Spanish-speaking South America for the first time since he was elected two years ago.

“He knows this reality, because he worked so long with the bishops of Latin America and as head of the Jesuits in Argentina,” said Daniel Gussmann, director of the Catholic Church’s Caritas charity in Buenos Aires. “He knows these countries, and their problems with poverty and where much of the population has no access to land.”

Francis will meet with the elderly poor in Ecuador, visit Bolivia’s notoriously violent Palmasola prison and tour Paraguay’s flood-prone Banado Norte shantytown, bringing a message of solidarity and hope to society’s most marginalized.

He’ll also preside over a meeting of grass-roots groups representing indigenous peoples, campesinos and the “cartoneros” who pick through garbage for recyclable goods — the last a group he long ministered to while working in the slums of Buenos Aires as archbishop.

When the Vatican hosted these grass-roots groups at the Vatican last year, Francis delivered an off-the-cuff, mini-encyclical on the rights of the poor, the injustices of unemployment and the need to care for God’s creation — themes he’ll likely repeat next week. He insisted then that he wasn’t preaching communism but the Gospel.

“Francis comes not to protect the church but to protect the poor and the Earth,” said Michael Lee, associate professor of theology and Latin American studies at Fordham University. He said that represents a different focus from the concerns of his two predecessors, who on trips to the Americas focused more on the survival of the church facing a sometimes hostile and secular agenda and competition from other religious movements.

“That’s an enormous shift, and one that’s going to be very well received in these countries and by these people,” he said.

While the trip involves many of the di rigueur elements of all papal tours — protocol visits to heads of state, pep talks to seminarians and meetings with regional bishops — Francis will also have some very personal encounters.

He’ll lunch with a Jesuit community in Guayaquil, Ecuador where he has something of a mentor in an elderly priest and where he frequently sent his own seminarians to study. He’ll celebrate Mass at Paraguay’s shrine to the Madonna of Caacupe, to whom Francis became particularly devoted after ministering to Paraguayan immigrants in Buenos Aires. And he’ll pray at the site where a Jesuit priest, the Rev. Luis Espinal, was left in 1980 after being detained and tortured by Bolivia’s paramilitary squads.

It’s likely to be a poignant moment, given Francis’ own experience with the right-wing military dictatorship in Argentina. The former Jorge Mario Bergoglio was head of the Jesuit order there when two fellow priests were kidnapped by the regime, which joined like-minded governments in Bolivia and Paraguay to mount Operation Condor to wipe out and “disappear” leftist opponents.

While Francis visited Portuguese-speaking Brazil in 2013 on a trip originally scheduled for Pope Benedict XVI, this is his first to Spanish-speaking South America and is one that he himself has planned. As a result, the choice of Ecuador, Bolivia and Paraguay is not happenstance.

Bolivia and Paraguay are the continent’s poorest countries, with one in four Bolivians living on $2 a day, according to the World Bank. The countries are also small in population and weight compared to regional powerhouses like Chile and Argentina, where Francis is planning to visit in 2016 along with Uruguay.

“Here you see a bit the pope’s criteria: To go to visit even those countries that aren’t geopolitically at the top rank of the world panorama,” said the Vatican spokesman, the Rev. Federico Lombardi.

It will be a grueling eight-day trip that will test the stamina of the 78-year-old Francis, who has only one full lung and a bad back: It will take him across the globe to extremes of altitude — from sea level to the 4,000-meter highs of La Paz, Bolivia and back again — with multiple in-country flights and a dawn-to-dusk schedule each day.

Lombardi said Francis didn’t have the “minimum of uncertainty or concern,” and that the trip was organized to make it brief and bearable.

That said, Lombardi wouldn’t rule out that Francis might chew coca leaves — or at least sip tea made from them — to offset the altitude sickness that might set in when he lands in La Paz for a brief, four-hour visit.

Francis has 22 speeches planned, but he’ll likely ditch some or all of them and speak off-the-cuff as he tends to do when working in his mother tongue, lending an air of unpredictability to the trip (and alarm for his handlers).

“The pope will probably improvise a lot in Spanish, so be prepared spiritually and practice your Spanish,” Lombardi joked.

UCC Church to Divest Over Israeli Treatment of Palestinians