(Akron, OH) – Hundreds of protestors filled Downtown Akron demanding justice for a 25-year-old motorist who was fatally shot by Akron police during a traffic stop/chase.

“Jayland was a sweet young man. He never caused any trouble,” said Lajuana Walker-Dawkins, Jayland’s aunt and the representative who spoke on behalf of the family Thursday. “We don’t know what happened. And we’d like to know for the mother, the sister, the whole family, and the community.

“They (Akron police) want to make him a masked monster with a gun,” said Atty. Bobby DiCello represented the Walker family. “Jaylen was unarmed.”

Jaylen Walker was driving when Akron police attempted to stop him for a traffic violation. He refused to stop leading the police on a frantic chase starting in North Akron, down Route 8 ending in a parking lot in the Firestone Park area. According to police, Walker jumped out of the car attempting to flee. Police alleged that he turned to face them.

Walker was shot in a hail of over 90 bullets from eight officers.

State Rap Emelia Sykes questions the capture tactics of police on young Black men and why it took eight officers to bring down on unarmed man with over 90 bullets.” (Reporter photo)

Chief Steve Mylett explained that he, “Doesn’t know the number of rounds fired. The Bureau Criminal Investigation (BCI) will discover the evidence. However, I anticipate that number to be higher. Medical examiners are looking to determine entrance and exit wounds.”

“There was a gun recovered in Mr. Walker’s vehicle,” said Chief Mylett. “But, at the time of the shooting, he (Walker) was unarmed.”

“After the shooting, officers went to Mr. Walker and provided first aid to save his life. One officer on voice cam video can be heard saying “he has a pulse.”

Akron Fire Medics arrived to take over aid but unfortunately Walker tragically passed away at the scene.”

Protestors, during rallies in front of City Hall and the Stubbs Justice Center, criticized the shooting as overkill, calling for transparency and justice for the Walker family. Rep Emelia Sykes expressed Black community concerns when she questioned, “the capture tactics of police on young Black men and why it took eight officers to bring down on unarmed man with over 90 bullets.”

The Akron NAACP and other concerned organizations led a crowd of a few hundred protesters peacefully walking to the City Hall/ Akron Police Department on Sunday, July 3rd. Representatives from the Freedom BLOC, Ohio ACLU, Faith community, and Black Elected Officials of Summit County expressed their concerns about the horrific shooting of an unarmed Black man.

Judi Hill, Akron NAACP president, joined other leaders requesting that any protest be peaceful. Akron Deputy Mayor Marco Sommerville said, “I know that you are angry and frankly you have the right to protest, but as the family requests, do it in a peaceful manner.”

With an abundance of caution, Mayor Horrigan cancelled the annual Fourth of July Downtown Rib Burn-off and all city sponsored holiday fireworks. On Monday, he established a 9 pm to 6 am curfew in downtown Akron until Tuesday, July 5th.

Who is Jayland Walker?

A pastor and family members of Walker said that he was a good person. A graduate of Akron Buchtel High School, Jayland was a wrestling champion, ran cross country, and played on the Summit County All-Star baseball team from Buchtel’s baseball team. He worked for Amazon, and Door Dash.

Robert DeJournett, pastor at St. Ashworth Temple in Akron, told News 5 that, “The family is still trying to wrap their arms around this. He was not that kid “Jayland didn’t even have a parking ticket,” said Drjournett. “Jayland had the biggest soul.” 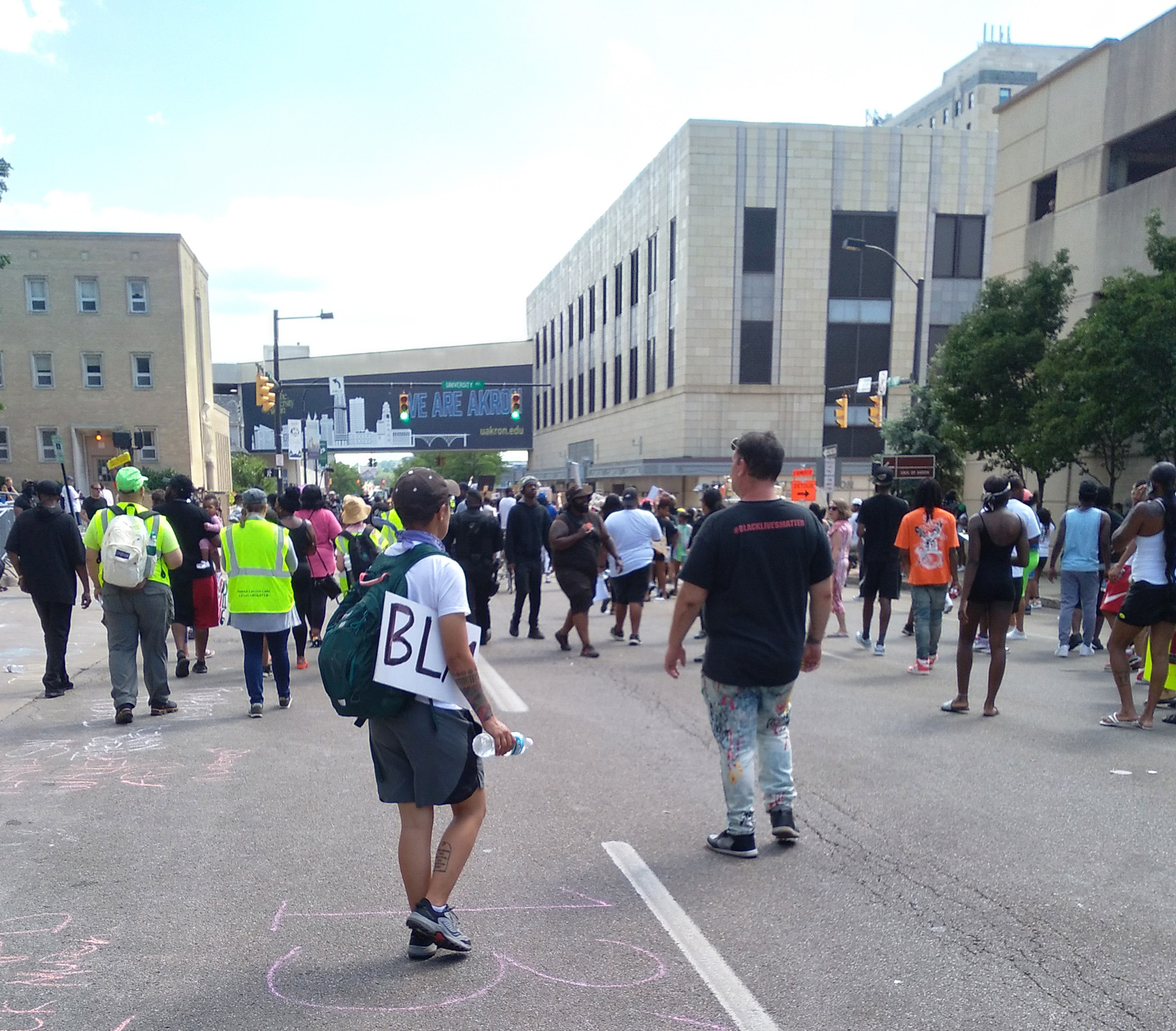 Sunday’s press conference, which showed the fatal incident, left many questions. Concerned citizen were surprised by the city’s quick display of the incident to show citizens what police were facing. The eight unidentified officers have been put on administrative leave pending the investigation.

“We want to reassure our citizens that more information will be coming,” said Chief Mylett who noted that, “this is a sad day for Akron. When an officer makes the most critical decision in his or her life as a police officer, to fire his service weapon at another human being, they have to be ready to explain why they did what they did.”

Akron Mayor Daniel Horrigan expressed his condolences to the family of Jaylen Walker. “I know that there is no amount of prayer that will bring Jaylen back,” he said, “but please know that the city mourns with you.”

Deputy Mayor Sommerville and Chief Mylett promised a thorough investigation by Ohio State Atty Gen. Yost and the Bureau of Criminal investigation. All officers are on administrative leave pending the BCI report.

“The footage is shocking,” said Sommerille, who went on to explain, “from here what we need to do is look at our process to get us to the next step and independent investigation to that level will further that process. Now that we have a new police chief working, the mayor has asked for outside help in investigating this case. This is Huge.” This move to have an outside entity assures that it will be the fairest most unbiased view of the fact, and that’s the right decision at the right time,” Sommerville said.

Despite promises of transparency, many in the Black community are angry about police pursuits and the number of shots fired by police.

Out of the 90 bullets fired, Walker was hit by over 60 bullets, according the Summit County Medical Examiners.

“It doesn’t take eight officers to stop a motorist. Was it necessary for them to fire 90 shots at Walker? Who will be held accountable for his death – which some call a senseless murder?