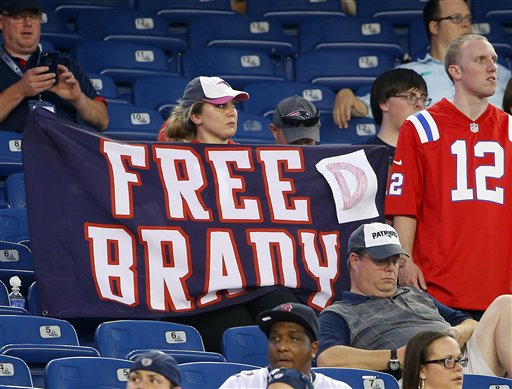 PITTSBURGH (AP) — Tom Brady is free and Ramon Foster can’t help but laugh. Sorry, the irony is just a little too delicious.

The Pittsburgh Steelers’ guard remembers joining the rest of his teammates in declining to ratify the new collective bargaining agreement between the owners and the NFL Players Association in the summer of 2011 because of concerns it gave Commissioner Roger Goodell too much authority.

Now Foster was sitting in his locker Thursday night praising the New England Patriots’ quarterback for making a stand against Goodell, a stand the Steelers felt obligated to make four years ago while the other 31 teams — the Patriots included — rushed to get back on the field and get paid following a four-month lockout.

U.S. District Judge Richard M. Berman’s decision to lift the four-game ban levied against Brady by the NFL for the four-time Super Bowl winner’s perceived role in “Deflategate” struck a serious blow to Goodell’s credibility. It also shed light on an issue the Steelers homed in on long ago: Goodell’s process of serving as judge, jury and executioner when it comes to issuing discipline is misguided.

“That’s just Roger Goodell abusing his power again, I guess,” Foster said. “We’ve known it for a while and it’s been going on for a while, too. We don’t know what’s going to happen or change from that, but it shows that he’s been abusing power.”

Berman took Goodell to task for developing his “own brand of industrial justice” when it came to penalizing Brady on what Berman concluded were shaky legal grounds. The NFL is appealing the decision “to uphold the collectively bargained responsibility to protect the integrity of the game.”

Either way, the players hope Brady’s victory will serve as a wake-up call to Goodell that maybe it is time to recalibrate the way the commissioner’s office polices those who wear “The Shield.”

Berman chastised Goodell for being overzealous while hitting Brady with a lengthy suspension for what was basically an equipment violation. That forced Brady to take the unusual step of going to federal court in an attempt to clear his name after running out of recourse within the NFL’s limited appeals process.

“The league is probably going to have to re-examine some of the ways they go about doing these things,” St. Louis defensive end Chris Long said. “That’s not necessarily a bad thing if it helps players in the future with the punishments.”

It’s something the men who pay Goodell seem to be up for. Atlanta Falcons owner Arthur Blank conceded there is a larger issue at play. The NFL doesn’t want to become the league where every disagreement between players and management ends up in front of a judge.

“I think we have to find ways to get to a better place sooner with the NFLPA than go through the process that we’ve gone through, just to placate things, which really isn’t about placating any longer,” Blank said. “It’s about where we can constructively negotiate for decades in terms of the commissioner’s responsibilities.”

Whether that means limiting the commissioner’s power or expanding the appeals process is unclear. What seems certain is that something needs to be done. The players point to Goodell’s increasingly spotty track record in the courts as proof.

“I think it has to be looked at that one guy is just making decisions,” Tennessee cornerback Jason McCourty said, “and then the fact that those decisions aren’t being upheld shows that the system is flawed.”

McCourty’s words echoed the concerns of former Steelers safety Ryan Clark, who called Goodell’s ability to fine players without a series of checks and balances a “deal breaker” before the current CBA was signed in 2011.

It sailed through anyway, though Brady’s triumph likely serves as a tipping point going forward.

“This whole ordeal has highlighted the need for players and owners to work together to make all policies fair and transparent for everyone in our game,” NFLPA president Eric Winston of the Bengals said in a statement. “I welcome an opportunity to have open and constructive dialogue with the league in the near future for how we can best accomplish that.”

The near future may be a little too optimistic. The NFL’s decision to fight Berman’s decision means the issue could drag on for several more months.

Not that Brady will care next Thursday when he and the Patriots raise another Super Bowl championship banner and welcome the Steelers, the guys who saw this coming long ago. It sounds weird, but Foster wouldn’t have it any other way.

“Often times the union gets talked down about, that we’re not doing the right thing,” Foster said. “For the most part Tom used the union lawyers to fight this case and it worked in our favor.”

US Open Lookahead: Venus Williams Could Use Tips from Serena

Vikings Among Teams With Most Under-25 Talent