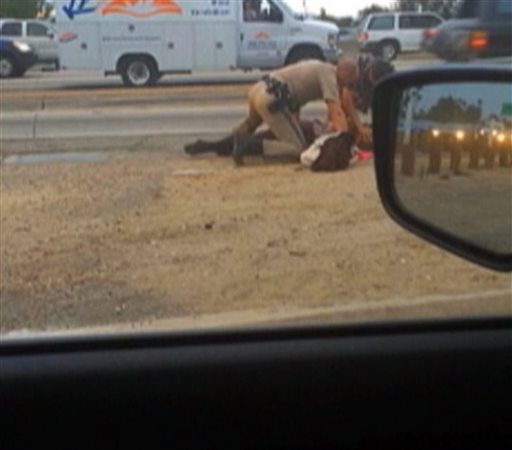 In this July 1, 2014 image made from video provided by motorist David Diaz, a California Highway Patrol officer, left, aided by another man, stand over a woman while punching her in the head on the shoulder of a Los Angeles freeway. The woman had been walking on Interstate 10 west of downtown Los Angeles, endangering herself and people in traffic, and the officer was trying to restrain her, CHP Assistant Chief Chris O’Quinn said at a news conference. The officer, who has not been identified, has been placed on administrative leave during an investigation. (AP Photo/David Diaz)

LOS ANGELES (AP) — The head of the California Highway Patrol said he was shocked and the agency’s reputation is hurt by a video showing an officer repeatedly punching a woman he pinned on the side of a Los Angeles freeway.

CHP Commissioner Joe Farrow vowed to complete a comprehensive investigation in weeks instead of the usual months.

The CHP said the woman was walking on Interstate 10 west of downtown Los Angeles, endangering herself and people in traffic, and the officer was trying to restrain her. The woman had begun walking off the freeway but returned when the confrontation occurred.

The now-viral video shot by a passing freeway driver shows Marlene Pinnock, 51, being repeatedly punched as she’s straddled by the officer on the shoulder of the freeway.

“This is one of the most significant events of my 34-year career that I’ve ever dealt with,” Farrow said. “We’ve never seen this before.”

Farrow spoke at a news conference Tuesday after a two-hour meeting with community and civil rights leaders, the second involving CHP officials since the July 1 incident occurred.

“I heard them loud and clear,” he said. “We put the issue right on the table in front of us. We’re dealing with it. We’re not going to run and hide.”

Farrow said state law prevents him from revealing the officer’s name. The officer has been with the department for a year and a half and has been assigned to desk duty pending the investigation’s completion.

Sgt. Denise Joslin said officials are working in conjunction with the Los Angeles County District Attorney’s Office on the investigation. Members of the Los Angeles Police Department were also present at Tuesday’s meeting and offered their support, she said.

The investigation will primarily focus on the video itself, Farrow said.

“The whole issue … comes down to what happened when the encounter got into a physical altercation,” Farrow said. “What was the cause for (the officer) to use force? And that’s where we are right now.”

No other video was taken. The in-car video didn’t capture the incident, which took place behind the highway patrol vehicle, Farrow said.

Rev. K.W. Tulloss, who heads the Los Angeles chapter of the National Action Network, said he appreciated Farrow and other top CHP officials meeting with community activists but said they wouldn’t back down from pushing for more answers and an outside investigation.

“He’s a CHP officer not an MMA fighter. It was truly excessive, it was visible, and it was just devastating,” Tulloss said. “There’s no excuse. CHP officers are trained law enforcement officers. They should know how to deal with (all types of) individuals.”

The department implemented a new “crisis intervention” training program this year to help officers deal with mentally disabled individuals, Farrow said. All personnel were required to complete it by June 30.

Pinnock remains in the hospital under a psychiatric hold. Her family found her covered in bruises, ice packs and taking pain medication.

“I’m just so overwhelmed,” daughter Maisha Allums told reporters Tuesday. “I can’t believe a CHP officer that was supposed to protect my mom and help my mom beat her like a — I can’t even say like a dog because if it was a dog getting beat like that he would have been in jail.”

Tami Abdollah can be reached at http://www.twitter.com/latams