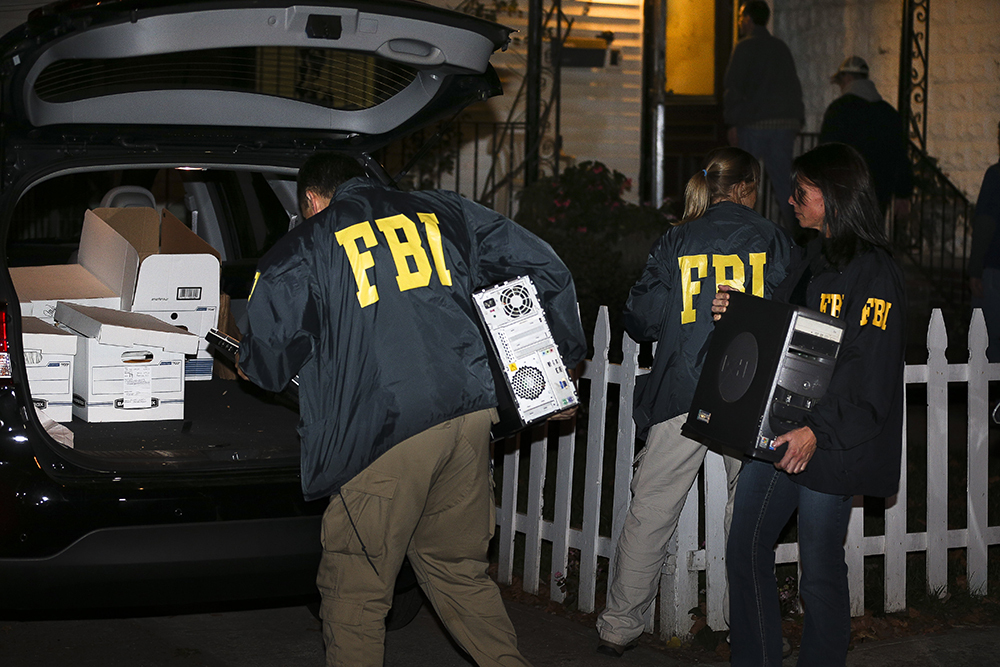 FBI agents remove evidence from the Brooklyn residence of Rabbi Mendel Epstein during an investigation on Oct. 10, 2013, in New York. (AP Photo/John Minchillo)

NEWARK, N.J. (AP) — Four Orthodox Jewish rabbis and one of their sons conspired to kidnap and force Jewish men into granting their wives religious divorces, according to a federal indictment handed up on Thursday.

U.S. Attorney Paul Fishman said several of the men charged Thursday are among a larger group previously charged in the alleged plot.

Rabbi Mendel Epstein and his son, David Epstein, both of Lakewood, New Jersey, Rabbi Martin Wolmark of Monsey, New York, and Rabbis Jay Goldstein and Binyamin Stimler, both of Brooklyn, New York, are charged with kidnapping conspiracy and related charges.

The U.S. attorney’s office alleges the rabbis charged Jewish women and their families tens of thousands of dollars to obtain religious divorces, known as “gets,” from unwilling husbands through the threat of force.

Attorneys for Goldstein, Wolmark and Stimler said their clients denied the charges.

Goldstein’s attorney, Aiden O’Connor, said the case was “overcharged” and failed to take into account the individual circumstances of the women who had been seeking divorces.

“This is not a kidnapping matter, these women were locked in terrible marriages,” O’Connor said.

Benjamin Brafman, an attorney for Wolmark, issued a statement calling the charges false, and added his client was a Talmudic scholar and expert in Jewish divorce who had resolved hundreds of marital disputes, always through legal means.

Rabbi Stimler’s attorney, Nathan Lewin, said his client denied the allegations that he was a member of a “kidnap team.” He said that Stimler is sought out because of his expertise in religious divorces, which he has always conducted through legal means.

Give Thanks No Matter What Season You Are In

After Supreme Court’s Decision on Prayers at Meetings, What About Crosses?