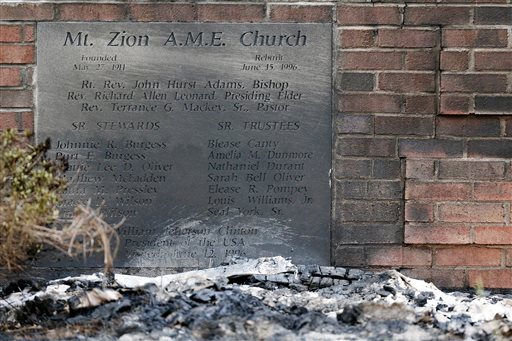 Ashes lie by a cornerstone outside Mount Zion African Methodist Episcopal Church, Wednesday, July 1, 2015, in Greeleyville, S.C. The African-American church, which was burned down by the Ku Klux Klan in 1995, caught fire Tuesday night, but authorities said arson is not the cause. (Veasey Conway/The Morning News via AP)

GREELEYVILLE, S.C. (AP) — Preliminary indications suggest arson was not the cause of a fire that destroyed a black church targeted by the Ku Klux Klan 20 years ago, a federal law enforcement official said Wednesday.

Local and regional officials said at a news conference that they haven’t ruled out any potential causes in the fire. But the federal official, who spoke on the condition of anonymity because he was not authorized to discuss the case publicly, told The Associated Press that preliminary indications show the fire at the Mount Zion African Methodist Episcopal Church in Greeleyville was not intentionally set and was not arson.

The fire is still under investigation, all the officials said.

Greeleyville is a town of about 400 people around 50 miles north of Charleston, where a pastor and eight members of a historic black church were fatally shot June 17 in what authorities are investigating as a hate crime. Dylann Roof, who is white, has been charged.

The fire — reported about 9 p.m. Tuesday as storms moved through the area — occurred as federal authorities also investigate a series of fires at black churches in several Southern states. So far, there is no indication the fires are related.

On Wednesday morning, only the brick walls of the Greeleyville church remained. The roof had collapsed, and the long windows no longer had glass in them. The side of the church facing the rural highway had a white cross that appeared charred.

Investigators walked through the debris, taking pictures and examining the remains of the building. Yellow crime scene tape kept reporters and nearby residents away from the building.

“I can tell you we’re not going to leave any stone unturned,” said Craig Chillcott, assistant special agent in charge of the Bureau of Alcohol, Tobacco, Firearms and Explosives office that oversees North and South Carolina. “The facts will ultimately determine what occurred. … It’s a bit premature to say how long it will take to make this determination.”

Steve Gardner of the Williamsburg County Sheriff’s Office and other officials at the news conference would not give other details about the fire, possible causes or the investigation.

“I know the community is seeking those answers,” Gardner said. “Please bear with us.”

The Rev. Alice Parson Wright, a pastor at an AME church about 20 miles away, stopped by the scene of the fire Wednesday morning.

Wright, who has preached at Mount Zion and knows the congregation, said the church won’t be defeated. “The way they rebuilt before … I can’t see them doing anything else but rebuilding,” she said.

Two members of the KKK pleaded guilty to starting the June 1995 fire.

The image of orange flames coming from that same church brought up painful memories, said Williamsburg County Councilman Eddie Woods Jr., who got out of bed Tuesday to drive to the church after hearing about the fire.

“That was a tough thing to see,” Woods said. “It is hurting those people again. But we’re going to rebuild.”