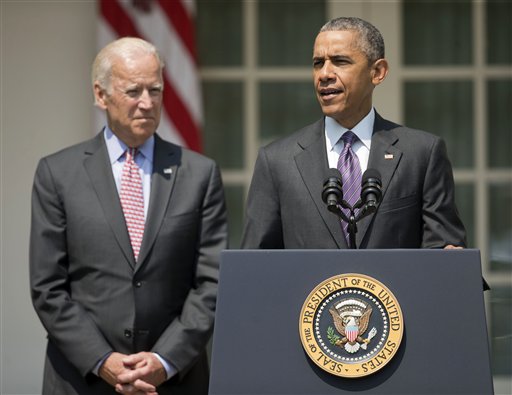 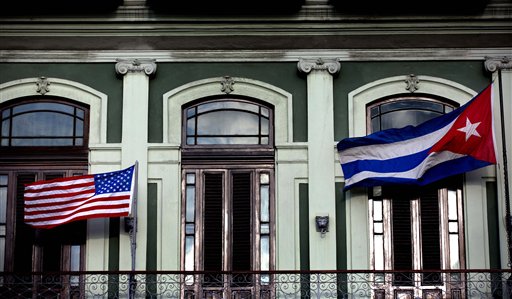 In this Jan. 19, 2015 file photo, a Cuban and American flag wave from the balcony of the Hotel Saratoga in Havana. President Barack Obama will announce July 1 that the U.S. and Cuba have reached an agreement to open embassies in Havana and Washington, a senior administration official said. (AP Photo/Ramon Espinosa, File)

WASHINGTON (AP) — President Barack Obama announced Wednesday that the U.S. and Cuba will reopen their embassies in Havana and Washington, heralding a “new chapter” in relations after a half-century of hostility.

“We don’t have to be imprisoned by the past,” Obama said from White House Rose Garden. “Americans and Cubans alike are ready to move forward.”

Cuban television broadcast Obama’s statement live, underscoring the new spirit. A state television anchor read a letter from Cuban President Raul Castro to Obama in which he wrote that Cuba is “encouraged by the reciprocal intention to develop respectful relations and cooperation between our people and governments.”

The embassy agreement marks the biggest tangible step toward normalizing relations since the surprise announcement in December that the U.S. and Cuba were restarting diplomatic ties. The posts in Washington and Havana are scheduled to open July 20, Cuba’s Foreign Ministry said.

Secretary of State John Kerry will travel to Cuba for the opening of the U.S. Embassy. Kerry, who is in Vienna for nuclear talks with Iran, called the embassy agreement “long overdue.”

For Obama, ending the U.S. freeze with Cuba is central to his foreign policy legacy as he nears the end of his presidency. Obama has long touted the value of direct engagement with global foes and has argued that the U.S. economic embargo on the communist island just 90 miles south of Florida was ineffective.

Amid the celebratory rhetoric, there were words of caution from both countries.

A statement from the Cuban government said reopening embassies was just the first step in “a long and complex process toward normalization of bilateral ties.” It demanded an end to the U.S. embargo, the return of the U.S. naval base at Guantanamo and a halt to U.S. radio and TV broadcasts aimed at the island.

And Rep. Ileana Ros-Lehtinen, R-Fla., said in a statement that opening a U.S. Embassy in Cuba “will do nothing to help the Cuban people and is just another trivial attempt for President Obama to go legacy shopping.”

The president on Wednesday reiterated his call for Congress to lift the embargo, which he said has failed to bring political change in Cuba. However, he faces stiff resistance from Republicans, as well as some Democrats, who say he is prematurely rewarding a government that engages in serious human rights abuses.

The president also will face strong opposition in Congress to spending any taxpayer dollars for building or refurbishing an embassy in Havana. Congress would have to approve any administration request to spend money on an embassy.

The Republican-led House Appropriations Committee voted last month to curb Obama administration efforts to work on an embassy in Cuba.

A $48 billion foreign aid bill for next year bars any work on an American embassy there unless Obama certifies that Havana is meeting the terms of a 1996 law aimed at pushing the island nation’s government toward democracy. That law’s conditions include Cuba’s extradition of people who are accused of crimes in the U.S.

The U.S. cut off diplomatic relations with Cuba in 1961 after Fidel Castro’s revolution. The U.S. spent decades trying to either actively overthrow the Cuban government or isolate the island, including toughening the economic embargo first imposed by President Dwight D. Eisenhower.

Since the late 1970s, the United States and Cuba have operated diplomatic missions called interests sections in each other’s capitals. The missions are technically under the protection of Switzerland, and do not enjoy the same status as embassies.

Ahead of Obama’s remarks, the top U.S. diplomat in Havana delivered a letter from the White House to Cuba about restoring embassies in the countries’ respective capitals. U.S. Interests Section chief Jeffrey DeLaurentis arrived at the Cuban Foreign Ministry in Havana on Wednesday morning to hand-deliver the message.

While the opening of embassies marks a major milestone in the thaw between the U.S. and Cuba, significant issues remain as the countries look to normalize relations. Among them: talks on human rights; demands for compensation for confiscated American properties in Havana and damages to Cuba from the embargo; and possible cooperation on law enforcement, including the touchy topic of U.S. fugitives sheltering in Havana.

Sen. Ben Cardin of Maryland, the top Democrat on the Senate Foreign Relations Committee, said the opening of embassies was part of the administration’s “common sense approach to Cuba.” However, he called for Cuba to recognize that it is out of step with the international community on human rights.

“Arrests and detentions of dissidents must cease and genuine political pluralism is long overdue,” Cardin said in a statement.

For Obama, the embassy announcements come amid what the White House sees as one of the strongest stretches of his second term. He scored major legislative and legal victories last week, with Congress giving him fast-track authority for an Asia-Pacific free trade deal and the Supreme Court upholding a key provision of his health care law.

Associated Press writers Peter Orsi in Havana, Bradley Klapper in Vienna, and Alan Fram in Washington contributed to this report.

One-Third of World’s People Still Have No Proper Toilets