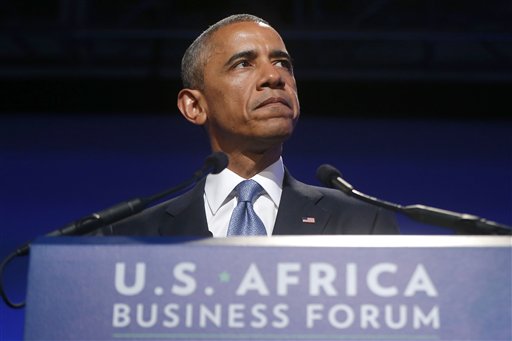 President Barack Obama pauses as he speaks at the US Africa Business Forum during the US Africa Leaders Summit, Tuesday, Aug. 5, 2014, at the Mandarin Oriental Hotel in Washington. African heads of state are gathering in Washington for an unprecedented summit to promote business development. (AP Photo/Charles Dharapak)

WASHINGTON (NNPA) – President Barack Obama announced Tuesday that the federal government and private U.S. companies are investing $33 billion in Africa – $12 billion in new commitments – as part of an overall plan for his administration to strengthen its relation with the world’s second-largest continent.

Speaking to nearly 50 African heads of state and top officials at the U.S.-Africa Summit at the Mandarin Oriental Hotel in the nation’s capital, Obama said: “As president, I’ve made it clear that the United States is determined to be a partner in Africa’s success – a good partner, an equal partner, and a partner for the long term.

Although this is the largest gathering of African leaders ever convened by a U.S. president, China has had several such conferences and has a strong presence in Africa, building infrastructure and making loans, without attaching the United States’ concerns about democracy or human rights.

Offering an indirect contrast to China’s presence in Africa, President Obama said, “We don’t look to Africa simply for its natural resources; we recognize Africa for its greatest resource, which is its people and its talents and their potential. We don’t simply want to extract minerals from the ground for our growth; we want to build genuine partnerships that create jobs and opportunity for all our peoples and that unleash the next era of African growth.  That’s the kind of partnership America offers.”

Obama announced five steps that he said will “take our trade with Africa to the next level.”

– Work to renew the African Growth and Opportunity Act (AGOA);
– Provide $7 billion in new financing to promote American exports to Africa as part of the “Doing Business in Africa” campaign;
– Partner with Africa to expand electricity, a requirement for economies to flourish;
– Help African countries trade with one another and
– Do more to empower the next generation of African entrepreneurs.

Most of the government funding will come from existent U.S. development banks and therefore will not require new spending approval from Congress.

The United States does most of its trading in Africa, primarily in the energy sector, with just three countries – South Africa, Nigeria and Angola.

“Our entire trade with all of Africa is still only about equal to our trade with Brazil – one country,” the president stated. “Of all the goods we export to the world, only about 1 percent goes to Sub-Saharan Africa.  So we’ve got a lot of work to do.  We have to do better – much better.  I want Africans buying more American products.  I want Americans buying more African products.”

Obama said, “I’m pleased that in conjunction with this forum, American companies are announcing major new deals in Africa.  Blackstone will invest in African energy projects.  Coca-Cola will partner with Africa to bring clean water to its communities.  GE will help build African infrastructure.  Marriott will build more hotels.  All told, American companies – many with our trade assistance – are announcing new deals in clean energy, aviation, banking, and construction worth more than $14 billion, spurring development across Africa and selling more goods stamped with that proud label, ‘Made in America.’”

After the president’s speech, on-stage interview with Takunda Chingonzo, a 21-year-old wireless executive in Zimbabwe, illustrated the complexity of relations in Africa.

Chingonzo said, “I’m working on my third startup –  it’s called Saisai.  We’re creating Zimbabwe’s first free Internet-access network, hence liberating the Internet.  So in our working, we came to a point in time where we needed to import a bit of technology from the United States, and so we were engaging in conversation with these U.S.-based businesses.  And the response that we got time and time again was that unfortunately we cannot do business with you because you are from Zimbabwe.”

He continued, “…And I understand that the sanctions that we have – that are imposed on entities in Zimbabwe, these are targeted sanctions, right?  But then we have come to a point in time where we as young Africans are failing to properly engage in business with U.S.-based entities because there hasn’t been that clarity.”

Obama said, “Well, obviously, the situation in Zimbabwe is somewhat unique.  The challenge for us in the United States has been how do we balance our desire to help the people of Zimbabwe with what has, frankly, been a repeated violation of basic democratic practices and human rights inside of Zimbabwe.

“And we think it is very important to send clear signals about how we expect elections to be conducted, governments to be conducted – because if we don’t, then all too often, with impunity, the people of those countries can suffer.  But you’re absolutely right that it also has to be balanced with making sure that whatever structures that we put in place with respect to sanctions don’t end up punishing the very people inside those countries.”

The U.S. has a diplomatic presence in Harare and, like the European Union, has been moving toward normalizing relations with Zimbabwe.

Obama said technology will forever alter how countries in Africa and elsewhere around the world are governed.

“The reason the Internet is so powerful is because it’s open,” Obama explained. “…And what facilitates that, and what has facilitated the incredible value that’s been built by companies like Google and Facebook and so many others, all the applications that you find on your smartphone, is that there are not restrictions, there are not barriers to entry for new companies who have a good idea to use this platform that is open to create value.  And it is very important I think that we maintain that.

“Now, I know that there’s a tension in some countries – their attitude is we don’t necessarily want all this information flowing because it can end up also being used as a tool for political organizing, it can be used as a tool to criticize the government, and so maybe we’d prefer a system that is more closed.  I think that is a self-defeating attitude.  Over the long term, because of technology, information, knowledge, transparency is inevitable.  And that’s true here in the United States; it’s true everywhere.”

Conyers Holds Off Sheffield, is Poised to Become Dean of Congress