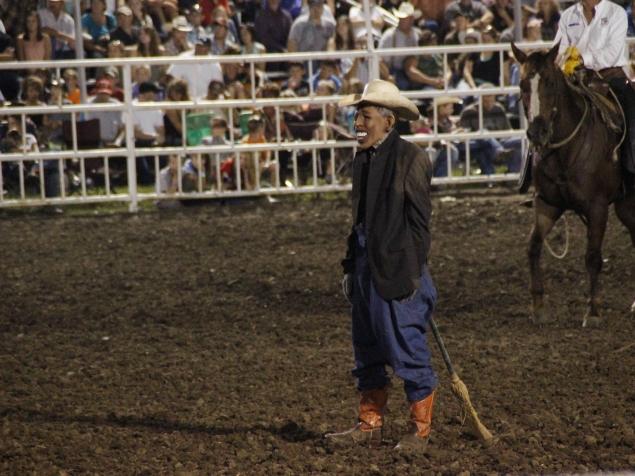 Controversy erupted Saturday after an event a spectator likened to a Ku Klux Klan rally. A clown in an Obama mask with a broom handle attached to his backside moved into an arena as another clown called out, ‘This bull’s going to get’cha, Obama!’

Rodeo announcer Mark Ficken resigned from his post as president of the Missouri Rodeo Cowboy Association in the fallout from the controversy.

The Missouri State Fair will force rodeo clowns to complete sensitivity training after a clown mocked President Obama in a stunt one spectator likened to a Ku Klux Klan rally.

The fair’s commission also approved a lifetime ban on the offending clown.

The controversy began on Saturday at the fair in Sedalia. A clown in an Obama mask with a broom handle attached to his backside moved into the arena as another clown called out over the microphone, “This bull’s going to get’cha, Obama! He’s gonna get’cha!”

The fair commission has called the stunt “unacceptable” and approved a measure that would force the Missouri Rodeo Cowboy Association to crack down on everyone responsible. The association would also have to prove all officials and subcontractors — such as the clowns — had successfully completed sensitivity training before working future rodeos.

Spectator Perry Beam said, “Everybody screamed” and “just went wild” during the performance.

Obama to Lay Out College Cost Ideas on Bus Tour