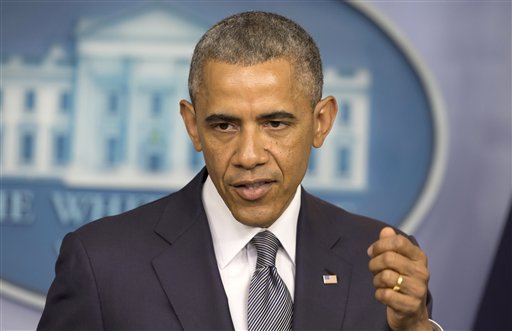 President Barack Obama speaks about the situation in Ukraine, Friday, July 18, 2014, in the Brady Press Briefing Room of the White House in Washington. (AP Photo/Jacquelyn Martin)

President Barack Obama said Wednesday that the administration is reviewing what authority he has to act without Congress to stop American companies from reincorporating overseas to avoid paying billions of dollars in taxes, a practice he has denounced as unpatriotic and has asked lawmakers to remedy.

Obama said he would prefer to sign legislation into law to keep the practice from becoming more widespread. But lawmakers disagree on how to accomplish that, making it highly unlikely that the legislative fix Obama wants will emerge before November’s House and Senate elections.

“The American people don’t want me just standing around twiddling my thumbs and waiting for Congress to get something done,” said Obama, who is approaching the final two years of his presidency and is eager to build on his legislative achievements.

Republicans have criticized Obama for acting on his own in a broad range of areas, from raising the minimum wage for federal contractors to delaying the implementation of certain aspects of his signature health care law. And the GOP-controlled House recently authorized a lawsuit against him on the issue.

But Obama suggested he’s willing to risk further angering his political opponents, particularly on a pocketbook issue that Democrats believe could be a vote-getter come November. He commented at a news conference at the conclusion of a three-day summit with African leaders.

“We’re reviewing all of our options,” Obama said. “The lost revenue to Treasury means it has got to be made up somewhere, and that typically is going to be a bunch of hard-working Americans who either pay through higher taxes themselves or through reduced services.”

Obama is also considering taking executive action to address the surge of child immigrants at the U.S.-Mexico border, and to make other changes to an immigration system he says is broken.

The House blocked consideration of a comprehensive immigration bill the Senate passed last year, but recently passed a measure that seeks swifter deportations of tens of thousands of unaccompanied minors from Central America who have entered the U.S. in the past year. That bill also would provide a fraction of the $3.7 billion Obama requested to address the border crisis.

“My preference would be an actual comprehensive immigration law, and we already have a bipartisan law that would solve a whole bunch of these problems,” Obama said, referring to the Senate legislation. “Until that happens, I’m going to have to make choices. That’s what I was elected to do.”

Obama said he will continue to use his executive authority to help make people’s lives better wherever he can and when Congress won’t act.

“That’s what I think the American people expect me to do,” he said.