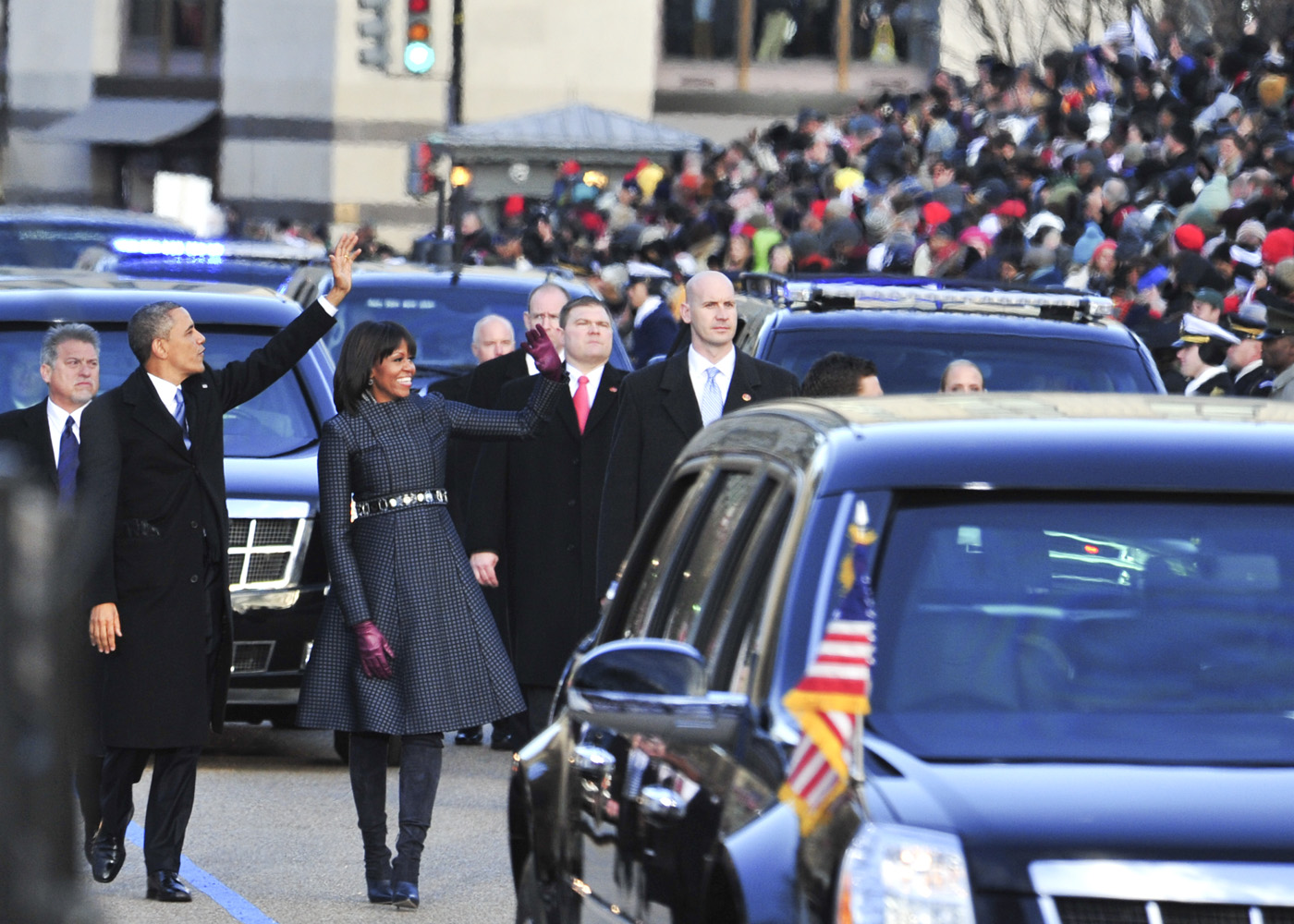 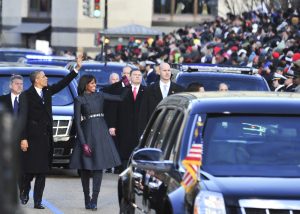 WASHINGTON (NNPA) — Rejecting calls for him to move closer toward his Republican critics, a confident President Barack H. Obama kicked off his second term on Monday by making an impassioned plea for a more inclusive America.

“It is not our generation’s task to carry on what those pioneers began,” Obama said in his inaugural speech. “For our journey is not complete until our wives, our mothers and daughters can earn a living equal to their efforts. Our journey is not complete until our gay brothers and sisters are treated like anyone else under the law – for if we are truly created equal, then surely the love we commit to one another must be equal as well.

Obama’s speech represented a clear shift from four years ago when the newly-elected president optimistically thought that he could inject civility and common sense into Washington’s contentious politics. After being rebuffed by opponents who placed politics ahead of the interests of the country – including taking it to the brink of a self-inflicted financial cliff – President Obama boldly shifted gears Monday by sketching a progressive vision and signaling a willingness to fight for it.

“For now decisions are upon us and we cannot afford delay,” he stated. “We cannot mistake absolutism for principle, or substitute spectacle for politics, or treat name-calling as reasoned debate. We must act, knowing that our work will be imperfect. We must act, knowing that today’s victories will be only partial and that it will be up to those who stand here in four years and 40 years and 400 years hence to advance the timeless spirit once conferred to us in a spare Philadelphia hall.”

Obama, the nation’s first African-American president, was sworn in on the day the nation observed the annual federal holiday to honor the birth of Dr. Martin Luther King, Jr. He was sworn in on a black leather traveling Bible used by King that was topped by a smaller one owned by President Abraham Lincoln. And he referenced both men as he declared Americans “are made for this moment.”

The direct link between the nation’s first Black president and the observance of King’s birthday underscores how far this country has progressed since the assassination of the Southern Christian Leadership Conference (SCLC) president and Nobel Peace Prize winner in 1968.
Although King did not live to see the election of an African-American to the nation’s highest office, he predicted in 1964 that a Black would be elected president of the United States. In an interview with the BBC, King was asked to comment on a statement by then New York Senator-elect Robert F. Kennedy that it might be possible to elect a Black president in 40 years.

“I’ve seen levels of compliance with the civil rights bill and changes that have been most surprising,” King said. “So, on the basis of this, I think we may be able to get a Negro president in less than 40 years. I would think that this could come in 25 years or less.”
Obama’s election came 44 years after King’s statement and four years longer than what Robert Kennedy had envisioned. Standing in the shadows of a U.S. Capitol built by slave labor, Barack Obama expressed much more self-assurance Monday than he had four years ago.

“We do not believe that in this country freedom is reserved for the lucky, or happiness for the few,” the president said. “We recognize that no matter how responsibly we live our lives, any one of us at any time may face a job loss, or a sudden illness, or a home swept away in a terrible storm. The commitments we make to each other through Medicare and Medicaid and Social Security, these things do not sap our initiative, they strengthen us. They do not make us a nation of takers; they free us to take the risks that make this country great.”

The reference to a nation of takers was a direct rebuttal to Mitt Romney’s telling a group of donors that 47 percent of Americans are “dependent on government” and would “vote for the president no matter what.” Ironically, Romney received 47 percent of the popular vote in his losing effort against Obama.

The president indicated he plans to move the U.S. away from “perpetual war” and will take on tough issues such as immigration reform and climate change. Obama became the first president to link the 1839 Seneca Falls Convention for women’s rights, the 1965 Selma-Montgomery, Ala. voting rights march and the 1969 Stonewall movement that put gay rights center stage.

He said, “We, the people, declare today that the most evident of truths –- that all of us are created equal – is the star that guides us still; just as it guided our forebears through Seneca Falls, and Selma, and Stonewall; just as it guided all those men and women, sung and unsung, who left footprints along this great Mall, to hear a preacher say that we cannot walk alone; to hear a King proclaim that our individual freedom is inextricably bound to the freedom of every soul on Earth.”

President Obama used “we the people” — the opening words of the U.S. Constitution — five times during his 18 1/2 minute speech.
Although attendance at the inauguration was expected to be half of the record 1.8 million four years ago, it appeared that Monday’s figures will probably exceed previous estimates. One official said there were probably more than 1 million in attendance on the National Mall. That would still rank ahead of 400,000 George W. Bush drew at the beginning of his second term and more than Bill Clinton’s 800,000 in 1993. Four years ago, Obama exceeded the then-record 1.2 million who saw Lyndon B. Johnson inaugurated in 1965.

After the inauguration, the Obamas led a parade procession that included 59 groups with 8,800 people from the Capitol approximately 1.6 miles down Pennsylvania Avenue to the White House. The president and the first lady exited their limousine near 9th Street, N.W. and walked for three blocks, returning the waves and cheers of excited onlookers, before returning to the motorcade.

President Obama, Vice President Joe Biden and their families watched the remainder of the parade from the glass-encased official review stand in front of the White House facing Lafayette Park.

Later, they danced at two private balls in the Walter E. Washington Convention Center, down from the 10 held in their honor four years ago. At each ball, they slow-danced as they were being serenaded by fellow Chicagoan Jennifer Hudson, who sang Al Green’s “Let’s Stay Together,” a tune the president had belted last year at the Apollo Theater in Harlem to display his vocal talent.

As usual, all eyes were on First Lady Michele Obama as onlookers waited to see what fashion designer she would elevate to international attention. She surprised everyone by selecting Jason Wu, the same designer she used for the first inauguration. The first lady came on stage at the Commander-in-Chief’s Ball in a dazzling ankle-length ruby-colored chiffon dress.

Alicia Keyes was no fashion slouch, wearing a red backless dress as she played the piano and sang, “Obama’s on firrrrrre!”
Earlier, Beyoncé Knowles stirred the inauguration crowd with her rendition of the National Anthem. However, the The Times of London reported — and other news outlets later confirmed — that she lip-synced the National Anthem.

According to the New York Times, a spokesman for the Marine Band said it is routine for musicians to record music for the inauguration in case the weather prevents them from keeping their instruments in tune. The Times said Col. Michael J. Colburn, the band director, received orders from event organizers to use the backup track just before Beyoncé was scheduled to sing live.

The New York Times later updated its story after a different spokesman for the Marine Band said no one in the band had been in a position to know if Beyoncé had performed live. However, CNN confirmed earlier news reports that the singer had lip-synced the National Anthem.
Kelly Clarkson and all other program events were performed live.

On Monday, Obama became the second and probably last president to be sworn in four times. In 2009, Supreme Court Chief Justice John G. Roberts flubbed his lines at the official swearing in and do-over was completed the next day. This time, Roberts administered the oath of office in a flawless private ceremony Sunday because the Constitution requires the president to be sworn in on Jan. 20; he repeated it in the public ceremony on Monday.

Reciting his oath Monday, it was President Obama’s turn to make a slight error. Instead of “United States,” he said, “United Sta –.” It didn’t matter because the official oath had already been administered the day before.

Franklin D. Roosevelt, who was elected four times before presidents were limited to serving two terms, was the only other president to utter the presidential oath four times.

“… We, the people, understand that our country cannot succeed when a shrinking few do very well and a growing many barely make it,” Obama said. “We believe that America’s prosperity must rest upon the broad shoulders of a rising middle class. We know that America thrives when every person can find independence and pride in their work; when the wages of honest labor liberate families from the brink of hardship. We are true to our creed when a little girl born into the bleakest poverty knows that she has the same chance to succeed as anybody else, because she is an American; she is free, and she is equal, not just in the eyes of God but also in our own.”

As he prepared to leave the U.S. Capitol, President Obama stopped and turned around. “I want to take a look one more time,” he said. “I’ll never see this again.”

High Graduation Rates Reach 40-year High – But Not for Blacks