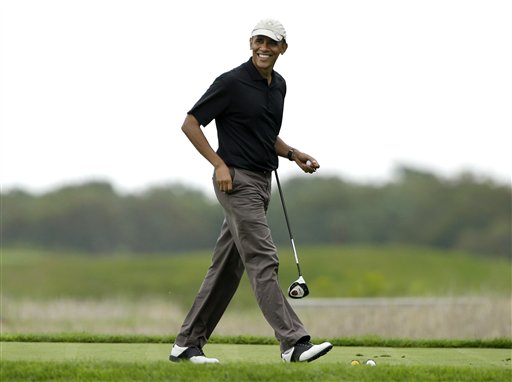 This Aug. 12, 2013, file photo shows President Barack Obama as he steps onto a tee while golfing at Vineyard Golf Club in Edgartown, Mass., on the island of Martha’s Vineyard, during his vacation. Obama is doing something unusual with his summer vacation on Marthas Vineyard: Hell come back to Washington midway through the getaway to attend White House meetings. (AP Photo/Steven Senne, File)

WASHINGTON (AP) — President Barack Obama is doing something unusual with his summer vacation on Martha’s Vineyard: He’ll come back to Washington midway through the getaway to attend White House meetings.

It’s an odd move, especially since Obama and his aides for years have fended off questions about the timing of his vacations by arguing that he is president at all times and can do the job wherever he is.

Obama planned to go ahead with the vacation even after the first of the military airstrikes he authorized in northern Iraq were carried out Friday.

He is scheduled to arrive on the wealthy island off the Massachusetts coast on Saturday and return to Washington a week later, on Sunday, Aug. 17. After the meetings, plans call for Obama to return to the Vineyard on Aug. 19 to resume the vacation, which ends five days later on Aug. 24.

Spokesman Josh Earnest said Obama would meet with staff, but he declined to say who else would participate or what the meetings are about.

“This is an opportunity for the president to do some in-person meetings here at the White House, just for a day or two, before he returns to Martha’s Vineyard,” Earnest said Thursday.

Earnest sought to contain mounting speculation about the vacation, saying the meetings aren’t related to “an emerging situation.”

Still, there are many brewing issues that could require Obama’s urgent attention, including fighting between Israel and Hamas militants, Russia’s buildup of troops along its border with Ukraine and the situation in Iraq, where a radical Islamist group seeks to tighten its grip on Iraq’s north.

Even so, crises rarely have forced Obama to cancel a vacation. His advisers often appear to take pride in resisting calls from Republicans for the president to return to Washington or from fellow Democrats nervous about the appearance of Obama either vacationing or tending to what some may consider less urgent matters.

“He travels with an array of communications equipment and national security advisers that will allow him to perform all of the functions that are required of America’s commander in chief,” Earnest said. “That’s true of any trip that he takes, and it will be true of the trip that the president takes this week.”

In 2009, Obama remained on vacation in his native of Hawaii after a man aboard a Detroit-bound flight tried to detonate a bomb on Christmas. Obama also pressed on with Martha’s Vineyard vacations in 2010 as rebels in Libya were on the verge of ousting their government, and last year when Egypt’s military overthrew the country’s first democratically elected leader.

Just last month, Obama resisted calls while on a fundraising trip in Texas to visit the U.S.-Mexico border to witness the surge of unaccompanied children arriving there.

Pressed about the appearance of ignoring a humanitarian crisis, Earnest declared at the time: “We’re not worried about those optics.”

Obama has upended his travel plans on several occasions. He has canceled three trips to Asia, including one in 2013 because of the U.S. government shutdown. His late-December departures to spend Christmas in Hawaii frequently have been delayed because of late action on Capitol Hill. In 2012, he returned to Washington from a Hawaiian vacation to deal with “fiscal cliff” negotiations.

Obama’s public appearances while on vacation typically are limited to stops at local merchants and dinner out with family and friends. But in another unusual twist this summer, the president plans to attend a Democratic fundraiser on Martha’s Vineyard on Monday.

The Obamas stay in Chilmark, on the western part of the island, and have rented a seven-bedroom, 8,100-square-foot house along the island’s Vineyard Sound side, far off any main roads.

Obama has vacationed on the quaint island every summer of his presidency except during the 2012 re-election campaign.

Philip Marcelo in Oak Bluffs, Massachusetts, contributed to this report.