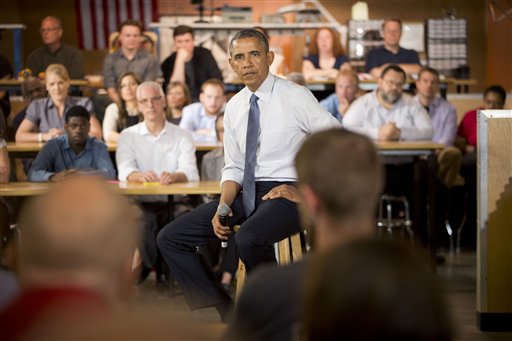 President Barack Obama listens to a question from a member of the audience during his visit to TechShop, Tuesday, June 17, 2014, in Pittsburgh, Pa. (AP Photo/Pablo Martinez Monsivais)

WASHINGTON (AP) — Dozens of companies, including Apple, Honda and Coca-Cola, have agreed to pay their suppliers more quickly in a bid to boost small businesses, the White House announced Friday.

President Barack Obama was to launch an initiative called SupplierPay during a White House meeting with businesses, suppliers and the head of the Small Business Administration. Under the program, 26 companies have committed to pay small businesses they contract with for parts and services faster, or to help them access capital at lower costs, the White House said.

The program mirrors the existing QuickPay initiative that requires the federal government to pay small contractors quickly, ideally within 15 days. The White House said that program has accelerated more than $220 billion worth of payments to federal contractors, making it easier for those businesses to grow.

Walgreens, FedEx and IBM are among the other companies with household names that have agreed to participate. The initiative comes as Obama is attempting to use his power to bring people together to spur economic growth despite opposition to his legislative agenda in Congress.

Uber, Lyft and a Road Map for Reinventing the Ride