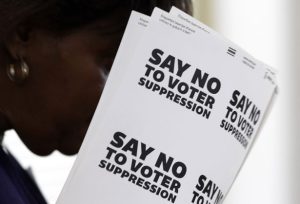 WINSTON-SALEM, N.C. (CharlotteObserver.com) — North Carolina’s new voter law will be tested in court Monday, as a federal judge hears arguments in a lawsuit filed to block the legislation from going into effect for the midterm elections in November.

U.S. District Court Judge Thomas Schroeder is scheduled to begin hearing arguments at 9:30 a.m. in the case of League of Women Voters of North Carolina vs. North Carolina.

A number of organizations have joined the League of Women Voters as plaintiffs, including the ACLU and the Southern Coalition for Social Justice. Also involved with the plaintiffs are the U.S. Department of Justice and the NAACP.

Plaintiffs argue that the voter law, technically the Voter Information Verification Act, is designed to blunt voter turnout by African Americans, Latinos, young voters, the poor and the elderly.