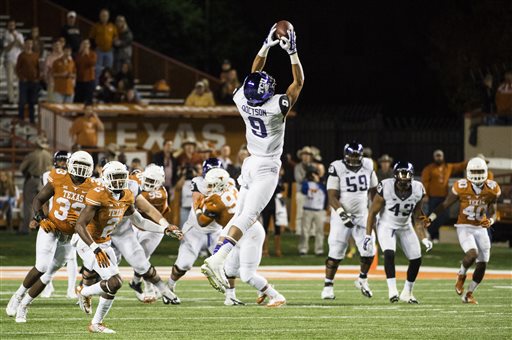 TCU’s Josh Doctson (9) catches a pass during the first half of an NCAA college football game against Texas, Thursday, Nov. 27, 2014, in Austin, Texas. (AP Photo/Ashley Landis)

AUSTIN, Texas (AP) — Texas fought hard to get bowl-eligible in coach Charlie Strong’s first season. After a humiliating 48-10 home loss to No. 6 TCU, the Longhorns now have to fight just to avoid a losing season.

Trevone Boykin passed for two touchdowns and ran for another, and the Horned Frogs (10-1, 7-1 Big 12, No. 5 CFP) dominated the Longhorns in forcing six turnovers — five by quarterback Tyrone Swoopes.

Already up 20-3, TCU poured it on with a 28-point fourth quarter that was both a message to the College Football Playoff committee and a reminder to Texas (6-6, 5-4) that the Longhorns are a long way from returning to Big 12 title contender status.

Pele Says ‘Nothing Serious’ with Him