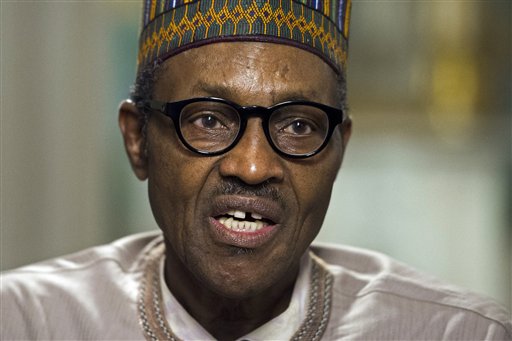 Nigerian President Muhammadu Buhari is interviewed by the Associated Press at Blair House in Washington, Tuesday, July 21, 2015. Buhari says a multinational African force will be in place within 10 days to take the fight to the Islamic extremist group Boko Haram that has killed thousands and was behind the abduction of hundreds of schoolgirls. (AP Photo/Cliff Owen)

(BBC) – The US has “aided and abetted” the Boko Haram Islamist militant group by refusing to provide weapons to Nigeria, President Muhammadu Buhari says.

A US law prevents the government from selling arms to countries which fail to tackle human rights abuses.

Boko Haram has killed some 10,000 people since 2009 and has also kidnapped hundreds of girls and women.

Last month, human rights group Amnesty International said that some 8,000 men and boys had died in Nigerian military custody after being detained as suspected militants.