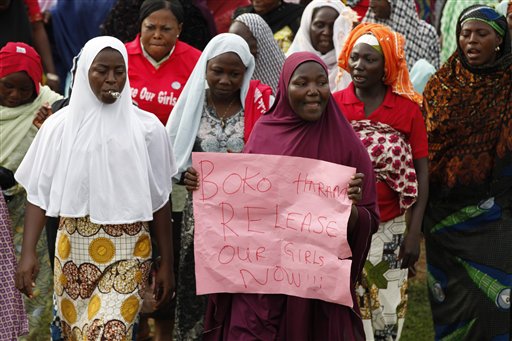 Women sing slogans during a demonstration calling on the government to rescue the kidnapped girls of the government secondary school in Chibok, in Abuja, Nigeria, Wednesday, May 28, 2014. (AP Photo/Sunday Alamba)

ABUJA, Nigeria (AP) — Nigeria’s leader vowed on Thursday to “do everything possible to bring our daughters home,” referring to the mass abduction of more than 300 schoolgirls, and said that the Islamic extremists who kidnapped them threaten the country’s democratic gains.

“It is a sad fact that as I address you today, all the gains of the past 15 years of democratic governance in our country are threatened by the presence of international terrorism on our shores,” President Goodluck Jonathan said in a speech marking Nigeria’s transformation from decades of military dictatorship. He also blamed the Islamic uprising on “extremist foreign elements” and offered amnesty to those who renounce violence.

He said he has instructed security forces “to launch a full-scale operation to put an end to the impunity of terrorists on our soil” but gave no details, not of what is being done to rescue the girls who the military claimed this week it has located. The military says it fears that using force to rescue them could instead get them killed. Jonathan has ruled out swapping the girls, who were kidnapped from a school in the town of Chibok on April 15, for detained insurgents.

Boko Haram started off as a moderate religious sect nicknamed after the shouted refrain of its leader — “Western education is sinful” — who preached that Western influences have corrupted Nigerian society and caused the massive graft that impoverishes the nation and keeps people in the northeast among the poorest of the poor.

Jonathan has promised to address the poverty that helps fuel the uprising — but only once the insurgency is put down. The World Bank says two-thirds of 170 million Nigerians struggle in poverty in Africa’s biggest oil producer.

Government troops sought to crush the Boko Haram movement in 2009, blasting its compound and mosque in Maiduguri, capital of northeast Borno state. Some 700 people were killed. The captured leader, Mohammed Yusuf, was shot dead in police custody. The group returned with a vengeance a year later, initially attacking police stations, and today has rear bases across borders in Chad, Niger and Cameroon. The military says fighters from those countries have been found fighting alongside Boko Haram in Nigeria. The insurgents are well-equipped with armored personnel carriers, machine guns and many other weapons, most apparently looted in attacks on Nigerian barracks.

The president offered an amnesty, saying: “For our citizens who have joined hands with Al Qaeda and international terrorists in the misguided belief that violence can possibly solve their problems, our doors remain open to them for dialogue and reconciliation, if they renounce terrorism and embrace peace.”

What Nigeria is experiencing is “a manifestation of the same warped and ferocious world view” that brought down the Twin Towers in New York and killed innocents at the Boston Marathon last year, he said.

Thousands of people have been killed in the 5-year-old insurgency, more than 2,000 so far just this year, and an estimated 750,000 Nigerians have been driven from their homes.

The extended kidnapping, now in seventh week, has highlighted the general failure to curb the uprising and what some see as Jonathan’s insensitivity to the plight of victims caught up in the war. Jonathan has never referred to dozens of other girls abducted in the past year, and accepted international help in the search for the girls only after many people became outraged at home and abroad. The extremists abducted more than 300 girls from the Chibok Government Girls School, according to the police. Chibok community leader Pogu Bitrus says 57 girls escaped by themselves, which leaves an estimated 272 still held captive.

In recent weeks, the extremists have used a two-pronged strategy and widened their theater of operation beyond the remote northeast of the country, with bombings at bus stations and marketplaces in three cities that have killed about 250 victims and daily attacks on northeast villages where 20 are killed one day, 50 another. In one attack this week, suspected Boko Haram gunmen killed 24 soldiers and 21 police officers and set ablaze their military barracks and police station in Buni Yadi town of Yobe state. Buni Yadi was the scene of one of the most horrific Boko Haram attacks on a government high school where gunmen in February set fire to a dormitory, burning alive some students, then shot and slit the throats of those who tried to escape through windows. At least 58 students were killed.

Some soldiers charge that corruption and lack of motivation keep the uprising going and that some officers enriching themselves off the coffers of a fattened defense budget have no desire to halt the conflict.

Earlier this week, the country’s defense chief, Air Marshal Alex Badeh, said many of the weapons captured from Boko Haram are “alien” to the Nigerian military, and urged action to halt imports of arms from neighboring states.