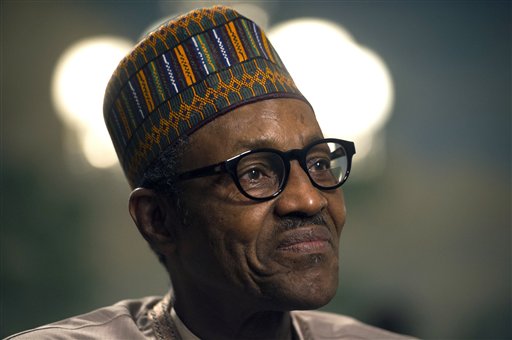 Nigerian President Muhammadu Buhari is interviewed by the Associated Press at Blair House in Washington, Tuesday, July 21, 2015. Buhari says a multinational African force will be in place within 10 days to take the fight to the Islamic extremist group Boko Haram that has killed thousands and was behind the abduction of hundreds of schoolgirls. (AP Photo/Cliff Owen)

WASHINGTON (AP) — Nigerian President Muhammadu Buhari said Tuesday a multinational African force will be in place within 10 days to take the fight to the Islamic extremist group Boko Haram that has killed thousands and was behind the abduction of hundreds of schoolgirls.

Buhari predicted in an interview with The Associated Press that Boko Haram would be defeated in 18 months or less. But he conceded that Nigerian authorities lack intelligence about the girls still missing after the mass-kidnapping from the northern town of Chibok in April 2014 — an act that stirred international outrage and a campaign to “Bring Back Our Girls” that reached as far as the White House.

He said his government is open to freeing detained militants in exchange for the girls’ freedom, but only if it finds credible Boko Haram leaders to negotiate with.

“I think Nigeria will make as much sacrifice as humanly possible to get the girls back. This is our main objective,” Buhari said, a day after meeting with President Barack Obama.

Buhari spoke at the presidential guest house opposite the White House in a room decorated with murals of ceremonial Washington. He wore a traditional embroidered hat, popular among Muslims in northern Nigeria.

The visit by the 72-year old former dictator comes two months after taking office. Both Nigeria and the United States look to improve relations that soured because of government and military failures under Buhari’s predecessor, Goodluck Jonathan, who was defeated in March elections. Obama said Monday the U.S. wants to cooperate on counter-terrorism and in combating corruption in Africa’s largest economy and oil producer.

The elections heralded the first democratic change of power in the West African nation that has suffered decades of military rule, but Buhari faces formidable challenges — not least the Boko Haram insurgency that has killed more than 13,000 people and driven another 1.5 million from their homes.

Buhari, a former general, last week fired the service chiefs of the once-mighty Nigerian military, which he has accused of corruption. But he expressed confidence that the Islamists that have launched suicide bombings and village attacks since his inauguration, killing hundreds, would be surrounded and eliminated with the help of neighboring Benin, Chad, Cameroon and Niger. He said the multinational force would be ready by the end of the month.

Boko Haram in March declared an affiliation with the Islamic State group, and Buhari said it has links with Islamist militants in northern Mali. But he predicted that the multinational force could break the back of Boko Haram within 18 months.

Despite the fighting talk, the Nigerian leader said he remained open to negotiations over the kidnapped girls but said it was first necessary to establish that those claiming to negotiate on behalf of the insurgents were really Boko Haram leaders who know the girls’ location and condition.

Dozens of the schoolgirls escaped in the days after the abduction, but 219 remain missing.

A human rights activist told AP this month that the extremists are offering to free the girls in exchange for the release of captured militant leaders. Buhari said: “We just can’t say yes or no in a sort of an impulsive manner. We have to establish the facts before we agree” to negotiations.

Buhari’s early visit to Washington is a sign of the importance the U.S. attaches to good relations with Nigeria, the world’s seventh-most populous nation at 170 million and America’s top trading partner in Africa. Top U.S. trade and finance officials have met the Nigerian delegation, and Buhari was meeting Tuesday with the chairman of the Joint Chiefs of Staff, Gen. Martin Dempsey, and CIA Director John Brennan, where he would be urging more American help against Boko Haram.

“The United States is very clear of the situation. What we need is intelligence, we need training facilities, we need some equipment,” he said.

Buhari acknowledged U.S. concerns over human rights abuses by Nigeria’s military. Amnesty International has accused the Nigerian army’s leadership of complicity in the death of 8,000 detainees in the battle against Boko Haram. Such concerns prompted Washington last year to block the sale of U.S. attack helicopters. Buhari said that new military chiefs were retraining forces and would adhere to internationally acceptable rules of engagement.

Nigeria also wants U.S. help in recovering government funds and the proceeds of crude oil exports that have been illegally diverted from the nation’s coffers, also hit by the decline in world oil prices.

In a Washington Post opinion commentary on Monday, Buhari wrote that $150 billion in funds have been stolen in the past decade and held in foreign bank accounts on behalf of former, corrupt officials.