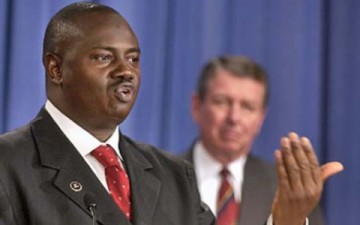 LAGOS, Nigeria (AP) — The chairman of Nigeria’s corruption-fighting Economic and Financial Crimes Commission is appearing before the Senate to answer accusations that he diverted billions of dollars.

Ibrahim Lamorde and other officers of the anti-corruption commission are alleged to have misallocated 1 trillion naira (about $15 billion) in recovered assets with the collusion of banks and estate agents. A whistleblower, security company owner George Udoh, provided documents making the allegations.

The accusations come as the commission has been pursuing new President Muhammadu Buhari’s pledge to stamp out Nigeria’s rampant corruption.

The charges against Lamorde and his commission are politically motivated, said Commission spokesman Wilson Ujuwaren Tuesday. “Even if the EFCC had not returned a kobo ¢ of recovered assets in its 12 years’ existence … it will be nowhere near a trillion naira,” he said.

Lamorde’s summons to appear this week before the Senate ethics committee comes after he interrogated the wife of Senate President Bukola Saraki and released her, apparently after finding no evidence of wrongdoing.

The commission has been accused of politically targeting scores of people questioned in recent months — more people since Buhari took office in May than during the six-year tenure of Buhari’s predecessor, Goodluck Jonathan.

An atmosphere of fear is almost palpable among Nigeria’s former ruling class, many of whom have accused Buhari and the commission of a witch-hunt. “EFCC will get you anywhere, anytime,” says a banner on its website.

The Anti-Corruption Civil Societies Coalition warned Tuesday of the need to fight “the seeming grand conspiracy and groundswell to frustrate the anti-corruption war,” saying Nigeria became “a big looting field” under the two previous administrations.

Buhari last month said a staggering $150 billion has been stolen. U.S. Justice Department officials told him one former minister alone stole $6 billion, according to a governor at the meeting.