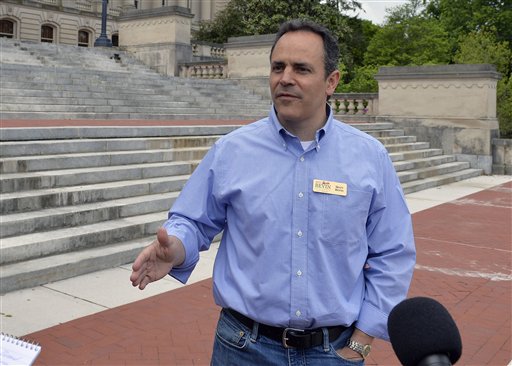 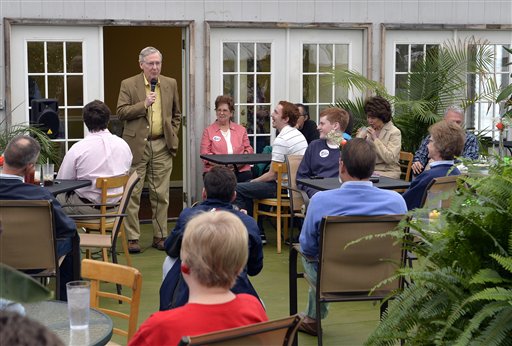 In this May 16, 2014, photo Kentucky Republican senatorial candidate Matt Bevin speaks with reporters on the steps of the Kentucky State Capitol in Frankfort, Ky. Bevin is touring the state on a last push before the primary on May 20. (AP Photo/Timothy D. Easley)

TOP OF THE TICKET

Tuesday’s top elections are the Republican primaries to pick U.S. Senate nominees in Kentucky, Georgia and Oregon. Oregon Republicans select a challenger to first-term Sen. Jeff Merkley, who only recently emerged as a GOP target. Georgia is a crowded race, and a July runoff is likely. The biggest noise, although probably not the biggest suspense, will come in Kentucky.

There’s probably no one tea party conservatives would rather knock off than Mitch McConnell, the Senate Republican leader who they view as too ready to compromise with Democrats. Their hopes were once high for Matt Bevin, a businessman making his first run for office.

Bevin has struggled with everything from his official biography to an appearance at a cockfighting rally, for which he apologized, but has mostly suffered in the face of withering attacks from McConnell’s well-funded political machine.

McConnell positions himself as a solid conservative who makes tough decisions and gives Kentuckians a powerful voice in Washington. If he wins the nomination Tuesday — it will stun Republicans everywhere if he doesn’t — his campaign will officially turn its attention to likely Democratic nominee Alison Lundergan Grimes, Kentucky’s secretary of state. The two have been sparring for months.

CONTROL OF THE SENATE

Seven Republicans — five well-known and reasonably well-funded — vie for the nomination to succeed retiring GOP Sen. Saxby Chambliss in Georgia, with the top two enduring a July 22 runoff to decide who faces likely Democratic nominee Michelle Nunn. The daughter of former U.S. Sen. Sam Nunn, she made news on the final day of the campaign by refusing to say whether she would have voted for President Barack Obama’s signature health care law.

Pediatric neurosurgeon Monica Wehby and state Rep. Jason Conger lead a five-person contest for the Republican Senate nomination in Oregon. Some of Wehby’s TV ads drew high praise, but the single mother of four faced reports that a wealthy ex-boyfriend called police last year and accused her of stalking him. The man now says he regrets making the call, and he is backing Wehby’s campaign.

In Arkansas, the U.S. Senate race will be fiercely contested — this fall. GOP Rep. Tom Cotton and two-term Democratic Sen. Mark Pryor are unopposed in their primaries.

There’s a two-week break after Tuesday, with the next primaries scheduled for June 3 in Alabama, California, Iowa, Mississippi, Montana, New Jersey, New Mexico and South Dakota.