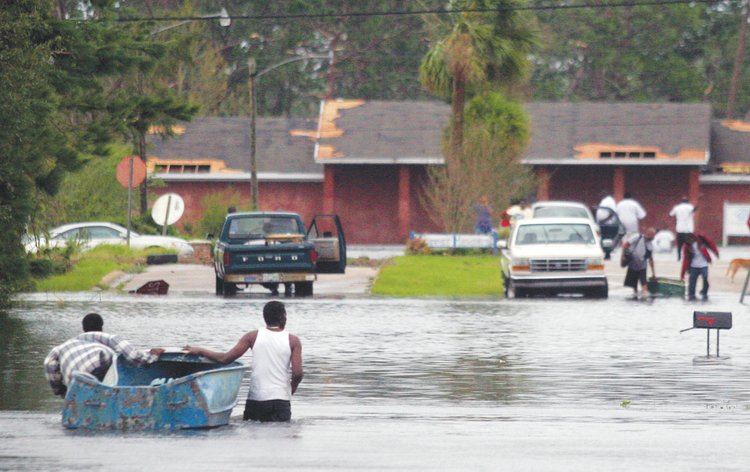 Hurricane Katrina slammed into the Gulf Coast on Aug. 29, 2005, causing billions of dollars of damage and a death toll in the thousands. (Photo courtesy of Dan Anderson)

NEW ORLEANS (AP) — As people search for words to describe New Orleans’ recovery a decade after Hurricane Katrina, they sometimes use words verging on the Biblical – an economic and cultural resurrection, a rising from the ashes.

Helped by billions of dollars in recovery money, buoyed by volunteers and driven by the grit of its own citizens, New Orleans has rebounded in ways few thought possible in the decade since Hurricane Katrina. Reforms are evident everywhere, from schools to policing to community engagement and water management, all aimed at buttressing its people against the next monster storm.

But even people who talk about a renaissance speak in the same breath about those didn’t recover. The ‘New’ New Orleans is whiter and more expensive to live in. African-American neighborhoods across the city still struggle, especially the chronically neglected Lower 9th Ward, a bastion of black home ownership before the floodwalls failed. And the murder rate is rising again.

“You’re going to hear a lot of folks say things are so much better, the economy is so improved, and other people are going to say it is so much worse,” said Allison Plyer at the New Orleans-based think tank, The Data Center. “And both those realities are true.”

It was hard to believe New Orleans would come out from under. Polluted water up to 20 feet deep flooded 80 percent of the city. Katrina killed more than 1,500 people from Louisiana, the National Hurricane Center reported a year later. Many of them drowned inside their homes. The city’s hospitals and police were overwhelmed. Survivors felt abandoned. The economy shut down.

Nearly a year later, most of the evacuees were still gone.

It seemed like a death blow for a lovely and romantic city already suffering from crime and racism, poverty and unemployment, corruption and neglect.

New Orleans is a national treasure nearly three centuries old, mixing African-American, French, Spanish and Caribbean traditions to create unique forms of music, food and fun found nowhere else in America. Would that treasure, and the people who made it so, survive and thrive?

Ten years after what seemed like the apocalypse, the question still hangs in the air.

“We’re still standing,” said Jannis Moody, a young African-American woman enjoying one of the city’s many free outdoor concerts, this one featuring the Grammy award-winning Rebirth Brass Band. “What’s clear,” she said, is that the people of New Orleans “are a resilient people.”

— Louis Armstrong Airport, where thousands of refugees slept while trying to get flights out in August 2005, finally surpassed its pre-storm passenger numbers this year.

— The New Orleans metro area has 11 percent more restaurants, according to the Census Bureau, diversifying the city’s distinctive take on Southern cuisine.

— New businesses are opening 64 percent faster than the national average, and sales tax revenue this year has been 29 percent higher than it was pre-Katrina.

— A sleek, modern University Medical Center has replaced the public Charity Hospital, where the emergency room served as a first and last resort for overwhelmingly poor black patients without insurance before it was shuttered after the storm.

— Almost all the city’s schools were taken over by the state and are run as charter schools. High school graduation rates jumped from 56 percent to 73 percent since Katrina, but critics question the progress and say schools no longer serve as important neighborhood social institutions.

— The city has recovered nearly 80 percent of its pre-storm population. Lakeview, where 1960s-era homes flooded to the eaves, is now one of the hottest real estate markets, and along the river, young professionals renovated classic “shotgun” style houses and Creole cottages to make Bywater one of the trendiest neighborhoods.

As many as 40,000 residents arrived after Katrina, Tulane professor Richard Campanella estimates. Brad Pitt and Angelina Jolie were trendsetters, building new housing in the Lower 9th Ward and buying a French Quarter mansion.

The “YURPS” (young urban renewal professionals) decided to stay, followed by more millennials who came during the recession, when New Orleans, by contrast, was flush with recovery and insurance money.

“You had a whole bunch of millennials who were deeply affected by the Katrina incident that they witnessed on TV,” Campanella said, and the city, damaged as it was, seemed like a “cultural beacon,” a “kind of undiscovered bohemia.”

Chris Schultz attracts a growing crowd to his Hack Night get-togethers at Launch Pad, a co-working space he helped found in 2009 to jump-start businesses and foster a sense of community. Each week, techies hover over laptops and debate code while drinking beer from the bar next door, where locally brewed NOLA Blonde is on tap.

None of this existed before the storm, Schultz said: “The vibrancy of the city was nowhere near what it is today. It catalyzed people who stuck around to really care about the city.”

New Orleans native Brooke Boudreaux has been part of this transformation as operating manager of the iconic Circle Food grocery store in the 7th Ward near Treme, which calls itself “the Birthplace of Jazz.”

“The city has changed and ultimately we needed to change,” she said.

Her family-owned business catered almost exclusively to black customers before their store was ruined in the floods. They just reopened last year, and Boudreaux says one of the big changes has been the influx of Hispanics and white people into the neighborhood. Now in addition to New Orleans staples like Camellia red beans, they sell tamales, corn tortillas, organic produce and fancy cheeses.

The business startups, young people riding bikes — they all point to a city on the move. But the wide Industrial Canal cleaves the Lower 9th Ward apart from all this progress, with no pedestrian-friendly bridges linking its residents to the rest of the city. Eighty-year-old Oralee Fields calls it “the wilderness.”

From her front porch, she looks out on a once-friendly residential street now overtaken by tall grass and fast-growing trees. “I’ve been waking up every morning looking at that grass,” Fields said in frustration. “I had nice neighbors. We all grew up together, children walking home together from school.”

People often say that parts of New Orleans look just like they did right after the storm. But that’s not true.

The massive piles of garbage are gone. Mounds of bricks and lumber were trucked away. Homes ruined by toxic mold were razed. What remains is an emptiness.

In the Lower 9th, that feeling is punctuated by a single house here, a cluster there. Brad Pitt’s “Make it Right” houses, community gardens and a brand new $20.5 million community center attest to hard-fought progress. But only one school has reopened in the neighborhood, and very few stores.

Thousands of people haven’t come back, even though many homes had been owned for generations before Katrina, said Darryl Malek-Wiley, a Sierra Club activist working to restore the community.

That prized status perversely worked against these homeowners, because without mortgages to pay, they weren’t required to and often didn’t have flood insurance, he said.

Government reconstruction money was doled out according to pre-Katrina market values that were too low to cover rebuilding. Extended families struggled to make decisions, and so did the city, debating for a time whether to abandon the area as a floodplain. All the uncertainty slowed the Lower 9th’s recovery for years.

New Orleans is still majority black, but the numbers have fallen from roughly 67 percent before the storm to about 60 percent today. African-Americans still suffer unequally from poverty and unemployment. Black households earn half the income of white households, and the city’s black middle and upper class has shrunk.

The worst number: 39 percent of New Orleans children live in poverty, virtually unchanged since before the storm.

“When Katrina hit, you got to see the real New Orleans, people who were trapped at the Superdome and the Convention Center — 99 percent poor, black. We don’t have anyone who seems to know how to fix that problem,” said Wayne Baquet, who owns Lil Dizzy’s Cafe in Treme.

The storm also made New Orleans more expensive — rents have skyrocketed by 43 percent. Cheap rentals were largely destroyed by the floods. The city demolished public housing projects where thousands had lived, replacing them with updated but lower-density homes. Thousands of families remain on a waiting list for subsidized housing. Many workers face longer commutes.

“The quality of the housing is definitely not worth the price that they’re charging now,” said Adrian Brown, a chef in the French Quarter. He gave up on walking to his job at an upscale Italian restaurant, and moved to the suburbs. “I remember a few years ago, you know, maybe a two-bedroom would be like $600. Now everything is like $1,100, $1,200 in these horrible neighborhoods.”

Blighted houses with boarded-up windows are getting bamboo floors and granite countertops around the St. Roch Market, where fishmongers once hawked their catches. The market just reopened as a gleaming, white-columned food hall bustling with bigger-spenders who sample key lime pie, charcuterie and summer kale salad.

“One time, you couldn’t even walk around here. … Used to be a lot of shooting, drugs, all kinds of crazy stuff,” said Troy Boudreaux, a lifetime resident of the neighborhood. He likes a lot of the changes, but says a lot of longtime residents avoid the market. “Black people been in this area for years, they ain’t going down there. They thinking it’s too much.”

Ten years after Katrina, New Orleans remains a work in progress, aiming to reverse historic racial and economic injustices. The city has capitalized on “the power and the spirit of the comeback” since Katrina, said Michael Hecht of Greater New Orleans Inc., an economic development agency.

But the massive infusion of government money and philanthropy has mostly come and gone. “In some ways, I think the next 10 years are going to be even harder than the first 10 years,” he said.

Scars remain. The tombs on Canal Street still hold bodies that went unidentified and unclaimed after the storm. Some people are still on edge, packing their bags when big storms roll in.

But Torrie Jakes, who enjoyed the “Rebirth” concert with her friend Jannis Moody, described a new commitment to her iconic city. She spoke on a lush summer evening, as kids played, families swayed, a vendor sold chicken burgers with collard greens and the mighty Mississippi lapped at the levee behind them.

“You’re not going to recover from the impact of Katrina and be the same. We’re different and I think it’s unfair to ask if we’re better. I think we’re just different,” she said. “Do I mourn the loss of that New Orleans? Yes, but do I like the new parts of New Orleans? Yes, I do.”