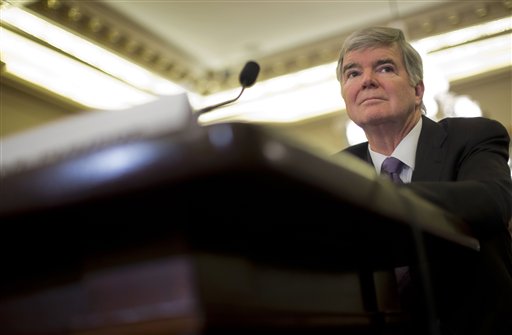 WASHINGTON (AP) — NCAA President Mark Emmert told a Senate committee Wednesday he supports “scholarships for life” and other reforms in how athletes are treated, then did such a good job of casting himself as a powerless figurehead that one senator told him: “I can’t tell whether you’re in charge or whether you’re a minion.”

Emmert faced a skeptical Senate Commerce Committee and said he feels college sports “works extremely well for the vast majority” and that the overall current model of amateurism should be preserved.

But he listed several changes he’d like to see enacted.

In addition to the end of the standard year-to-year scholarships, he said scholarships should also cover the full cost of attending college, not just basics such as room and board.

He also called for better health, safety and insurance protocols and said universities must confront what he called the “national crisis” of sexual assault.

Emmert said such changes could come about if Division I schools decide to remake their decision-making structure in the coming weeks, giving more authority to the five biggest conferences.

He reiterated that the schools themselves are in charge of the rules and emphasized the challenge of creating a consensus among college presidents, coaches and athletic directors.

That led to sharp words from Sen. Claire McCaskill, who leveled the “minion” statement and added: “If you’re merely a monetary pass-through, why should you even exist?”

The Missouri Democrat was particularly concerned with research that showed a significant percentage of universities allow athletic departments to handle sexual assault investigations of athletes.

Emmert said he was “equally surprised and dismayed by” McCaskill’s numbers and that he would work to put an end to the apparent conflict of interest.

The hearing came as the NCAA faces pressure from multiple fronts to reform how athletes are treated and compensated.

The organization is awaiting a judge’s ruling following a three-week trial in Oakland, California, in which former UCLA basketball star Ed O’Bannon and others are seeking a share of revenues from the use of their names, images and likenesses in broadcasts and videogames.

Emmert testified in the O’Bannon trial, where he opposed any effort to pay players because it would destroy the bedrock of amateurism on which college sports is based.

There have been moves, however, to pay more attention to the athlete’s concerns. Emmert noted that multiyear scholarships were recently reinstated after being banned for close to four decades. The Big Ten last month came out in support of guaranteed four-year scholarships and improved medical coverage for athletes.

Also testifying was former University of North Carolina football player Devon Ramsay, who spoke of the red tape he had to endure to clear his name after allegations of plagiarism. UNC has been dealing with a long-running academics and athletics scandal, and Ramsay said he came to the conclusion that the school “was more concerned with penalties and losses of scholarships than protecting one of its own.”

Ramsay also called for mandatory summer internships that would help prepare athletes for future careers. He said it’s “almost impossible” to complete an internship at a competitive football school because of the time demands made by coaches.

“The NCAA as an institution no longer protects the student athlete,” Ramsay said. “They are more concerned with signage and profit margins.”

Committee chairman Jay Rockefeller also took the bigger view, questioning whether the amateur model is sustainable. He told Emmert: “I think I am just very skeptical that the NCAA can ever live up to the lofty mission that you constantly talk about.”

“I don’t see how a multibillion dollar commercial enterprise can merely be an amateur pursuit,” the West Virginia Democrat said. “I don’t see how the NCAA will ever be capable of truly making a safe, quality educational experience for students their No. 1 priority.”

Rockefeller said he doesn’t plan to drop the issue. He dropped veiled threats of using subpoena power and the committee’s special investigation unit should the Democrats retain control of the Senate and the NCAA not move forward with reforms.

Near the end of the hearing, which lasted just under three hours, Rockefeller said too much of the hearing was conducted in “self-protection mode.”

“My real feeling from this hearing,” Rockefeller said, “is that we haven’t accomplished much.”

Emmert declined an invitation from Rockefeller to make a concluding statement. After the hearing, Emmert deflected questions from reporters while being led to a freight elevator to leave the building.