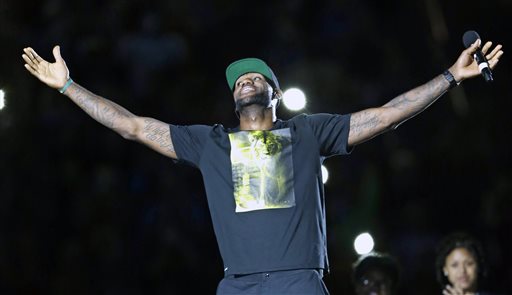 Cleveland Cavaliers’ LeBron James smiles as he is introduced at his homecoming at InfoCision Stadium Friday, Aug. 8, 2014, in Akron, Ohio. (AP Photo/Tony Dejak)

NEW YORK (AP) — LeBron James will play his first game since rejoining the Cleveland Cavaliers at home Oct. 30 against New York, then return to Miami for the first time on Christmas.

The NBA regular season will open Oct. 28, with the NBA champion San Antonio Spurs hosting the Dallas Mavericks in one of the three games that night.

The league released its schedule, featuring a lengthened All-Star break, on Wednesday night during an NBA TV special, with James’ return to his original NBA team putting the Cavaliers in a number of prime positions.

That includes the game at Miami in the third spot on the five-game Christmas schedule, traditionally a highlight of the NBA season. James led the Heat to two championships and four NBA Finals appearances in four years before deciding to return to his native Ohio.

The other Christmas day games are: Washington at New York; Oklahoma City at San Antonio in a rematch of the Western Conference finals; the Los Angeles Lakers at Chicago; and Golden State at the Los Angeles Clippers.

The nightcap is a rematch of a testy Christmas night matchup from last season that featured multiple ejections. The Clippers then went on to beat the Warriors in seven games in the first round of the playoffs.

The last game before the All-Star break in New York is Feb. 12, when the Cavaliers visit the Bulls. The regular season doesn’t resume until the following Thursday, two days later than usual, with a doubleheader on TNT.

The three-game opening night closes with Houston visiting the Lakers, which should feature Kobe Bryant’s return from an injury-shortened 2013-14 season. Derrick Rose’s first regular-season action since season-ending knee surgery early last season should come the next night, when Chicago visits the Knicks on the first full night of action.

Other items of note:

—The NBA Finals rematches between the Spurs and Heat are scheduled for Feb. 6 in San Antonio and March 31 in Miami.

—If a Kevin Love trade to Cleveland is completed, his return to Minnesota would be Jan. 31.

—James’ first game in San Antonio since his final one in a Miami uniform is March 12.

—Pau Gasol heads back to Los Angeles for the first time since leaving the Lakers for Chicago on Jan. 29.

—Jason Kidd’s first visit to Brooklyn since leaving the Nets to coach Milwaukee is Nov. 19.

—ESPN has 75 games in the regular season and ABC will show 15. NBA TV will televise 97 games.

Woods Pulls Out of US Ryder Cup Consideration