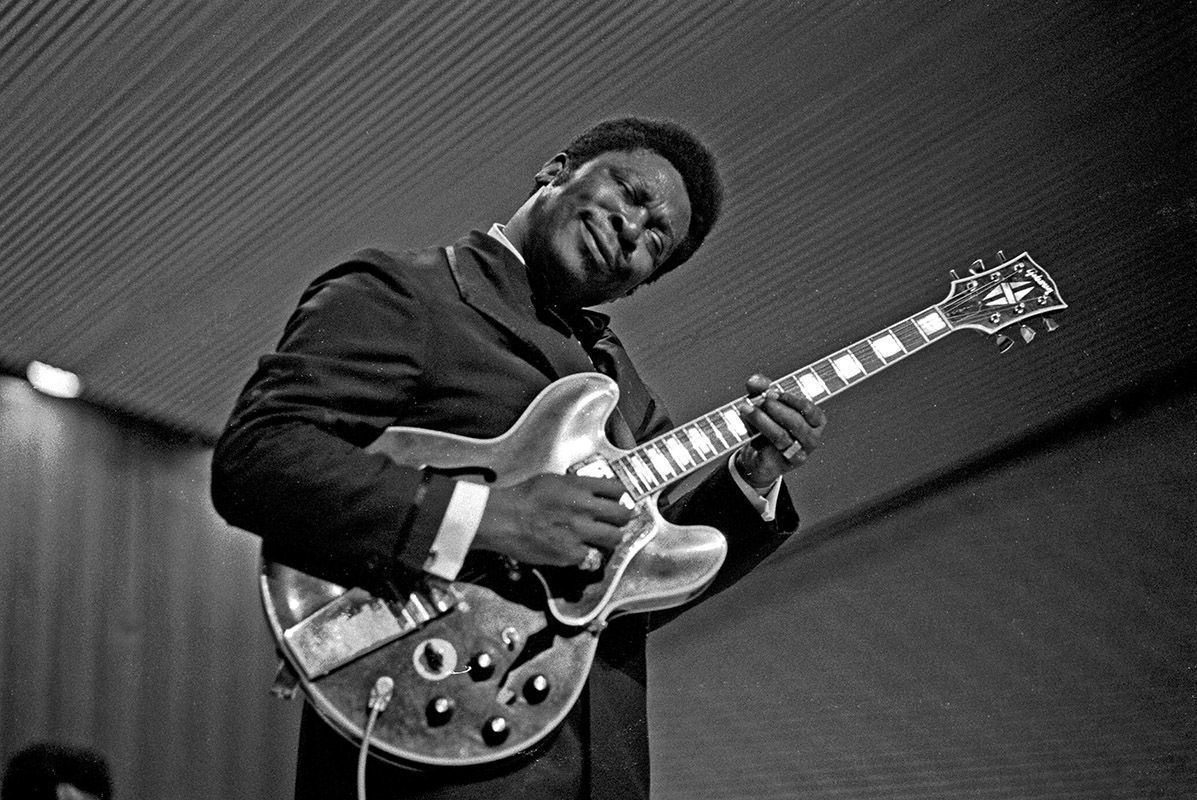 In 1949, a fight broke out at a dance in Twist, Arkansas. During the melee, a barrel filled with kerosene, that had been lit earlier to warm the party, was knocked over. As flames licked the dance floor, B.B. King, a twenty-something musician, escaped into the cool Arkansas night with the rest of the party goers. But King had forgotten his guitar inside. On that fateful night, risking his life, he ran back into the building to rescue his prized instrument.

“Luckily, he managed to escape with his guitar as the building collapsed around him,” according to Biography.com. “King later learned that the fight erupted because of a woman who worked at the venue named Lucille. From then on, King named his guitar ‘Lucille’ to remind himself never to do anything so foolish again.”

Now, six different Lucilles are currently on display at the B.B. King Museum in Indianola, Mississippi. The museum is celebrating its 10th anniversary this year and museum officials said that plans are in the works to begin construction on a new addition to the museum to continue the legendary musician’s legacy.

In 1969, King released his biggest hit single, “The Thrill is Gone.” He was not only the first bluesman to tour the Soviet Union in 1979, but he also became the first bluesman to enter the pop mainstream, making regular appearances in Las Vegas, Nevada and on network television, according to his profile on Biography.com.

“King also found commercial success with the many collaborations he made over the years, including with artists Eric Clapton, Elton John, Sheryl Crow, Van Morrison and Bonnie Raitt,” the profile said. “In 1987, King was inducted into the Rock and Roll Hall of Fame.”

The B.B. King Museum opened in 2008 and features thousands of rare artifacts, award-winning films, and interactive exhibits, according to a press release about the museum. Visitors to the museum journey through the Mississippi Delta and witness scenes from B.B. King’s life in a state-of-the-art theater.

“Beginning in the 1930s Mississippi Delta, visitors get a firsthand account of Riley B. King’s life on the farm as a sharecropper and tractor driver,” the press release said. “Another gallery takes visitors on an adventure as King finds his way to the airwaves of WDIA where you can hear firsthand accounts of Riley’s conversion to the ‘Beale Street Boy.’ From there, visitors see the transformation from artist to icon, B.B. King’s development from a musician touring the Chitlin’ Circuit in the South,” to a global ambassador for American music and Black culture.

Malika Polk-Lee, the executive director of the museum, said that the original idea for the museum came from the Indianola community. The residents of the small southern town felt the need to honor King, because of his great ambassadorship for blues music and for Indianola.

“He always claimed Indianola no matter where he traveled,” Polk-Lee said. “The citizens here realize the importance of honoring such an icon that was from their hometown.”

Verna Ransom, the educational director for the B.B. King Museum, said that the museum offers programs designed to educate students of all ages about music, dance, the culinary arts, and health and fitness.

“One thing about B.B. King that everyone should know is that he wanted our community, our children to be healthy,” Ransom said.

Polk-Lee added that about 98 percent of the programs are free to the public and that tourists are welcomed to participate.

“When it comes to our educational programming, we have something for every age group,” Polk-Lee said. “It was important that we made sure that all of our programs benefit the citizens here in our Delta community.”

[/media-credit] The B.B. King Museum opened in 2008 and features thousands of rare artifacts, award-winning films, and interactive exhibits, according to a press release about the museum. (B.B. King Museum)

B.B. King is actually buried on the grounds of the museum and Polk-Lee said that fans of the blues legend should visit the museum to pay homage to his legacy. The new construction plans include a memorial courtyard to enhance his burial site.

Polk-Lee said that King always walked through the museum with grace and amazement during his yearly tours, shaking hands, signing autographs and sharing stories with all of the museum visitors.

“Mr. King was a very humble man,” Polk-Lee said. “He never met a stranger and he never thought of himself as the icon that he was.”

Polk continued: “It was surreal for him to have this museum built in his honor.”

Learn more about the B.B. King Museum at bbkingmuseum.org.

Freddie Allen is the former Editor-in-Chief of the NNPA Newswire and BlackPressUSA.com. You can follow Freddie on Twitter @freddieallenjr.