Miley Cyrus on 'Racist' VMA Criticism: 'I Don't Keep My Dancers Around 'Cause it Makes Me Look Cool'
Advertisement 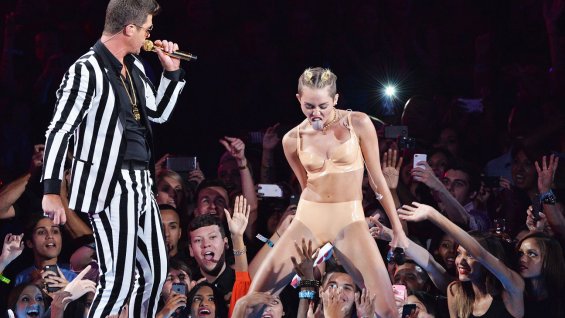 Miley Cyrus is still talking about the twerking VMA performance that launched a thousand complaints.

This time, she lashes out at critics who think her performance was racist or a “minstrel show,” in which she used her black dancers as props.

“I don’t keep my producers or dancers around ’cause it makes me look cool,” Cyrus tells Rolling Stone. “Those aren’t my ‘accessories.’ They’re my homies.”

She also disputes the notion that she’s pretending to be black. “I’m from one of the wealthiest counties in America,” she says. “I know what I am. But I also know what I like to listen to. Look at any 20-year-old white girl right now — that’s what they’re listening to at the club. It’s 2013. The gays are getting married, we’re all collaborating. I would never think about the color of my dancers, like, ‘Ooh, that might be controversial.’ ”

Cyrus also thinks it’s a double standard that people are criticizing her for grinding with Robin Thicke but not bashing the “Blurred Lines” singer.