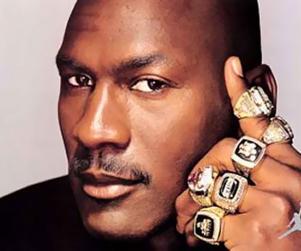 Even though LeBron James finally won a championship last season and silenced many of his critics along the way, he still hasn’t won over His Airness, Michael Jordan.

ESPN reports that in an interview with NBA TV, Jordan said that he would still take Kobe Bryant over James if given the choice. Bryant has won five championships with the Los Angeles Lakers whereas James just has the one ring he won last year with the Miami Heat.

“Five beats one every time I look at it,” Jordan said. “And not that (James) won’t get five. He may get more than that, but five is bigger than one.”

Considered by many to be the greatest basketball player of all-time and possibly the best athlete in history, Jordan won six championships while he was a member of the Chicago Bulls. During the course of his NBA career he was by far the most dominant player in the game and was named the league’s most valuable player five times. He also won an Olympic gold medal with the 1992 Dream Team.

Despite Jordan’s choice, James is doing all he can on the court right now. At the time of the comments, he was on a record setting streak where he compiled six straight games of at least 30 points and 60 percent shooting. He doesn’t sound overly concerned about MJ’s choice.

Jordan will turn 50 on Sunday. Bryant is in his 17th NBA season while James is in his 10th.