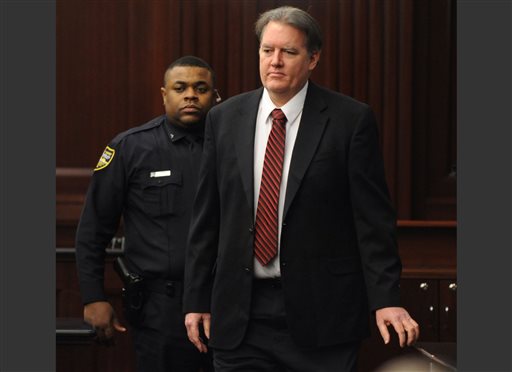 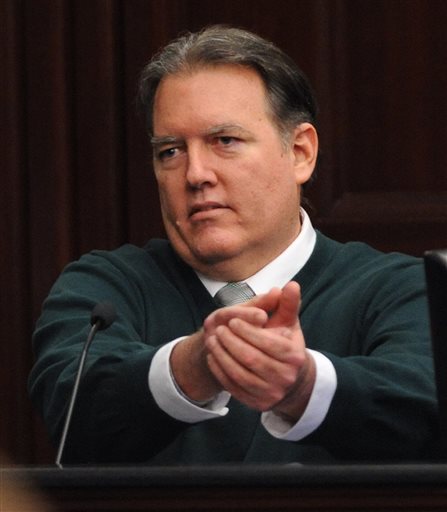 Michael Dunn, gestures on the stand in his own defense during his trial in Jacksonville, Fla., Tuesday, Feb. 11, 2014. (The Florida Times-Union, Bob Mack, Pool)

(The L.A. Times)—The retrial of Michael Dunn, a Florida man who shot an unarmed teenager to death after asking him and his friends to turn down their music, began Monday with jury selection.

In February, Dunn, 47, was found guilty on three counts of attempted second-degree murder and one count of firing into a vehicle. But the jury deadlocked on the top count, first-degree murder. Dunn is being retried on that charge.

On Nov. 23, 2012, Dunn, a software engineer, fired 10 shots into an SUV, killing Jordan Davis, 17. The shooting in a convenience store parking lot in Jacksonville erupted after Dunn asked the four teenagers in the vehicle to turn down their music.

Davis has argued that he fired the shots in self-defense. He has testified that he was threatened and saw 4 inches of what he thought was a shotgun in the car, though no weapon was found. It was after this perceived threat that Dunn reached into the glove compartment of his car, pulled out a legal 9-millimeter handgun and fired 10 shots at the car that was driving off. Three bullets hit and killed Davis. Six others hit the car, and one shot missed.

The case has drawn widespread attention in part because Davis is white and all four teenagers in the SUV were black.

‘Pardons of Innocence’ Film to Debut at CBC Friday in D.C.