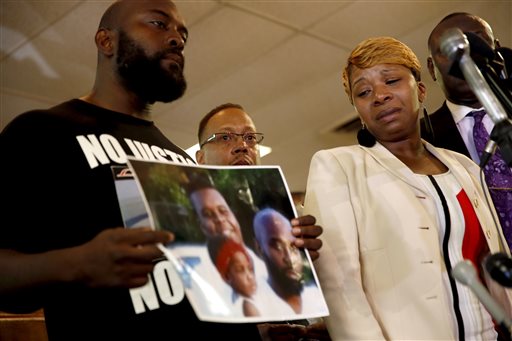 Lesley McSpadden, right, the mother of 18-year-old Michael Brown, watches as Brown’s father, Michael Brown Sr., holds up a family picture of himself, his son, top left in photo, and a young child during a news conference Monday, Aug. 11, 2014, in Ferguson, Mo. Michael Brown, 18, was shot and killed in a confrontation with police in the St. Louis suburb of Ferguson, Mo, on Saturday, Aug. 9, 2014. (AP Photo/Jeff Roberson)

(Politico) – The family of Michael Brown will attend a march Saturday led by the Rev. Al Sharpton on Staten Island on behalf of Eric Garner, who died last month in the borough’s Tompkinsville neighborhood.

Last Saturday, Sharpton had suggested that Brown’s family would attend, but shortly thereafter, a spokeswoman for the National Action Network said the family wasn’t yet sure because it hadn’t yet planned a funeral for Brown.

Benjamin Crump, the attorney for the family, has since announced that Brown’s funeral and memorial service would be held on Monday.

NY1 reported that the Brown family confirmed attendance for the rally on Wednesday.

A Peaceful Night in Ferguson After a Visit from Eric H. Holder Jr.

Why Obama Can’t Go There