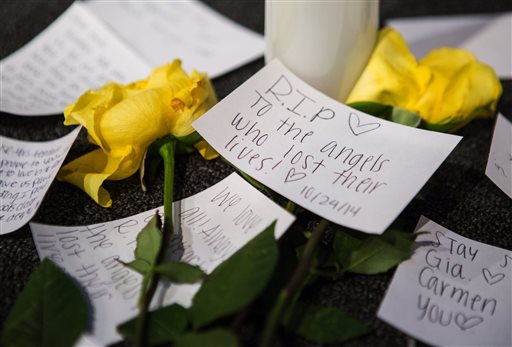 Messages of support on the stage near candles and flowers in between morning services at The Grove Church in Marysville, Wash., two days after the Marysville-Pilchuck High School shooting, on Sunday, Oct. 26, 2014. (AP Photo/The Seattle Times, Lindsey Wasson)

(NBC News) – Police have said so for years and now scientists have measured the effect: Mass shootings and school attacks do inspire copycats.

As many as 20 to 30 percent of attacks are set off by other attacks, according to researchers at Arizona State University and Northeastern Illinois University. The effect lasts about 13 days, they write in the report published Thursday in the Public Library of Science journal PLoS ONE.

And mass killings — such as the 2012 attack on small children at Sandy Hook elementary school in Connecticut, the 1999 Columbine massacre, and last month’s shooting of nine people at a prayer meeting in Charleston — are becoming alarmingly common in the United States.

“On average, mass killings involving firearms occur approximately every two weeks in the U.S., while school shootings occur on average monthly,” wrote Sherry Towers, a research professor at ASU, and her colleagues.

America’s Real Founding Moment: Why We Get Independence Day All Wrong