Mary Alice Thatch: From ‘Janitor’ to NNPA Publisher of the Year
Advertisement 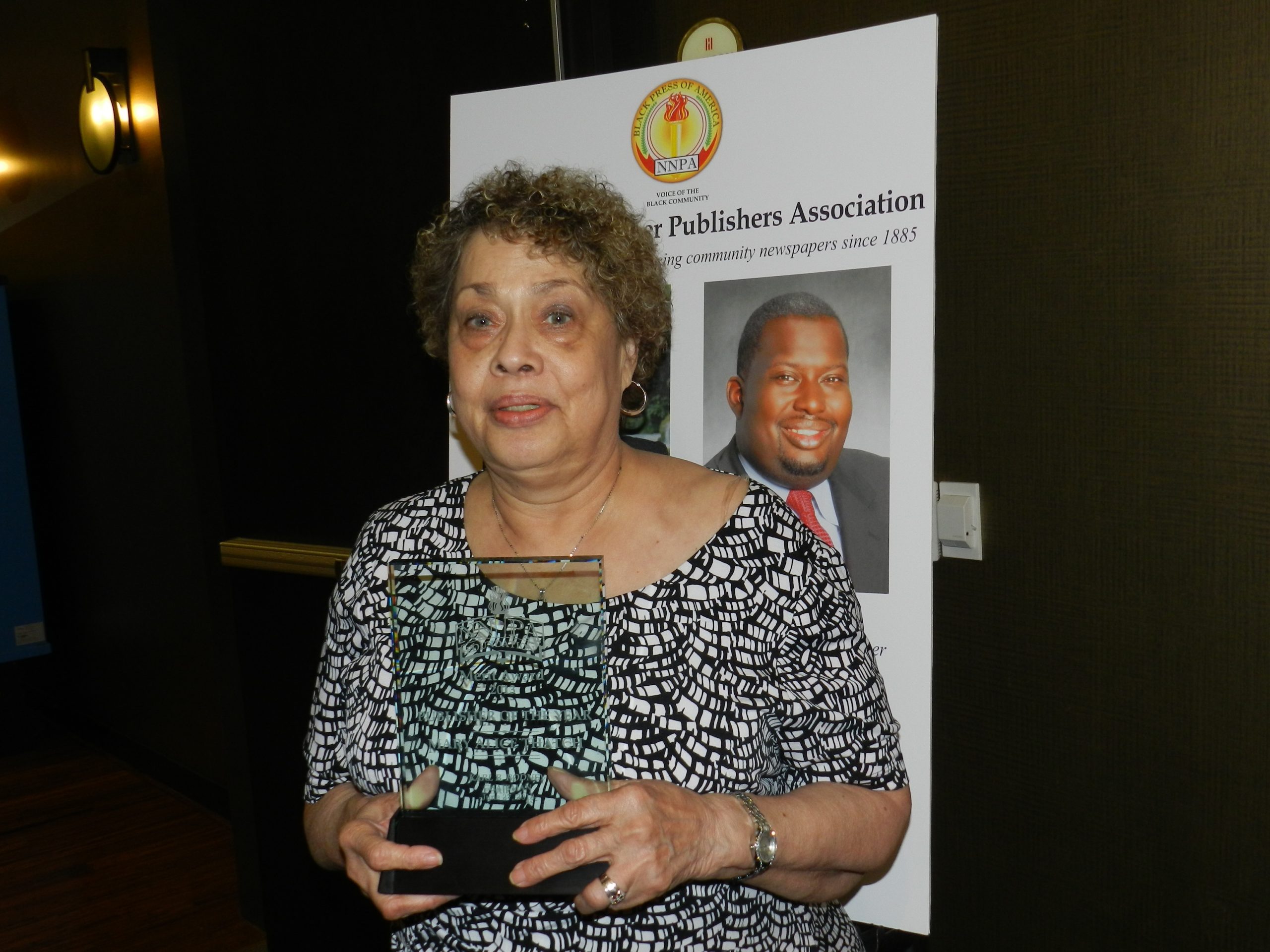 WASHINGTON (NNPA) – If the Wilmington Journal ever holds a contest to determine who began work there at the youngest age, Mary Alice Jervay Thatch would win hands down. Literally.

“My daddy used to say that I started at 3 or 4 months old, when I started crawling around on the floor,” Thatch recounted with a hearty laugh. “I was hired as the janitor to clean the floor – with my diaper.”

Thatch is now editor-publisher-owner of the newspaper, the same positions her father, Thomas C. Jervay, Sr., held when she was scooting around the office.

She shared, not only a love for journalism with her father, but a strong sense of devotion to the community the Wilmington Journal serves.

The Journal is across the street from where Alex Manley edited another Black newspaper, the Daily Record, in the late 1890s.

Wilmington was a hotbed of White supremacy. Right-wing Whites rioted in 1898 and forced elected officials from office in the only recorded government coup d’état in U.S. history. A group calling itself the Committee of Twenty-Five issued a document on Nov. 9 of that year called the White Declaration of Independence. It contended that the U.S. Constitution had never anticipated the “enfranchisement of an ignorant population of African origin” and that “the men of the state of North Carolina who joined the union did not contemplate for their descendants a subjection to an inferior race.”

According to an account of that period by an Albany, N.Y.-based research group called Filling in the Gaps in American History, “In August, Black newspaperman, Alex Manley, wrote an editorial in response to a speech supporting the lynching of Black men as a deterrent, as well as punishment for their interest in White women.  His comments about White men lusting after Black women were the subject of heated talk among all communities. One of the loudest voices was that of Alfred Moore Waddell, a former Confederate Officer and Democratic US Congressman.  He wanted to oust Republicans and Populists from local and state government in the upcoming election.  Waddell used Manley’s editorial to incite anger towards people of African descent being allowed to vote, let alone hold public office and implored White citizens to  ‘choke the Cape Fear with carcasses’ if need be to remove the Republicans in power during the 1898 elections.”

The account of the Wilmington Riot continued: “On November 10, hundreds of White men met at the armory and headed to the building which housed the only daily Black newspaper in the country.  Manley had gotten word of the intended action and had already left town. He was able to relocate and continue his journalism career but never returned to Wilmington. The crowd increased to over a thousand White men, armed with handguns and rifles, as they followed Waddell through the streets of Wilmington. They broke into the Daily Record building, damaged printing equipment, set fires, and watched as the building burned.  Later they posed for photographs in front of their handiwork.”

A headline in the New York Herald on Nov. 11, 1898 read: “Whites Kill Negroes and Seize City of Wilmington.” The deck just below the headline was, “Nine Black Men are Shot Down. Slaughter Follows Wrecking of the Record Newspaper Office Owned by Negro.”

Thomas C. Jervay, Sr., an outspoken supporter of the falsely convicted Wilmington Ten, never forgot about the path Manley had paved, especially after his own newspaper was bombed in 1973. The bomber wrote a letter to Jervay, which he turned over to prosecutors.

“Mr. Manley’s paper was right across the street from where the Journal is housed now,” Thatch stated. “Both were bombed because of positions the papers took, which really shows the power of the Black Press.”

And he was. In 1974, Lawrence R. Little, who identified himself as propaganda minister of the militant Rights of White People organization, was found guilty of planting dynamite that exploded at the Journal’s office. After four days of testimony, an all-White jury found him guilty and a White judge sentenced him to life imprisonment.

An FBI agent testified at the trial that Little had told him, “I have heard about the good Black people. They are all niggers, and all niggers are animals, and animals are beasts, and beasts don’t have souls. If you kill a nigger, you haven’t committed murder.”

Despite hate mail from White supremacists over the years, Jervay, who served as chairman of the National Newspaper Publishers Association (NNPA) in the 1950s, never tempered his demand for justice and equality. Neither has his daughter, Mary Alice.

At an event in 2011, commemorating the 40th anniversary of the Wilmington Ten’s false convictions, Louis Hines, a local International Longshoreman Association official, issued a challenge.

“He said, ‘There are two things we have got to do in Wilmington,’” recalled Mary Alice Thatch, who was in the audience. “’And those two things are to seek compensation for these 10 folks, and we’ve got to always make sure that the doors of the Wilmington Journal are open.’”

“The next day or the day after, I was talking to Dorothy [Leavell],” Thatch recalled. “I was serving on the NNPA Foundation Board at the time. I was secretary, and she was chairperson of the foundation. I was talking about what had been said, and she said, ‘That’s an NNPA project.’ I said, ‘If you say so.’ She talked to Danny [Bakewell, then president of the NNPA] and the rest is history.”

The Wilmington Ten Pardons of Innocence Project was officially launched in Washington, D.C. at the 2011 Black Press Week luncheon at the National Press Club.

When Ben Chavis, the leader of the Wilmington Ten, was asked to describe his lowest point in prison, after some hesitation, he said, “I was warned not to go into the shower. I couldn’t take a bath for eight months.”

With North Carolina-based Cash Michaels serving as the lead writer on dozens of stories that were sent out to NNPA newspapers through its news service – riveting disclosures that revealed that the prosecutor’s hand-written notes showed that he selected “Uncle Tom types” and KKK sympathizers for the jury – a national movement grew to include a national petition drive by MoveOn.org and the NAACP national office.

The two-year campaign resulted in outgoing North Carolina Gov. Beverly Perdue issuing pardons of innocence on Dec. 31, 2012 to the Wilmington Ten. Although a federal appeals court had overturned their convictions in 1980 because the prosecutor had, among other things, failed to turn over evidence that was favorable to the defense, the Wilmington Ten were released from jail, but they were not fully exonerated. Not until the governor pardoned them.

“The box of papers was the real key to getting the pardons,” Thatch said. “What was contained in [prosecutor James] ‘Jay’ Stroud’s  papers was what convinced Gov. Perdue that this was truly, as she put it, ‘naked racism.’ When the announcement was made, I hollered all over the house,” she said. “This was the biggest accomplishment that we have ever made in North Carolina.”

Thatch said it was a combination of Wilmington Ten leader Ben Chavis’ optimism, the commitment of two original attorneys – James E. Ferguson, II and Irving, who never abandoned the case – the diligence of Cash Michaels and Rev. William Barber, president of the North Carolina chapter of the NAACP, NNPA publishers who carried the stories, and others that made the pardons a reality.

In large part, because of the Wilmington Ten campaign that she led, Thatch was elected NNPA 2012 Publisher of the Year.

“I was surprised,” she said, “It it required a great deal of hard work and tenacity, and I feel very honored and appreciative to NNPA for the recognition.”

The Crisis of Black Males is a National Problem