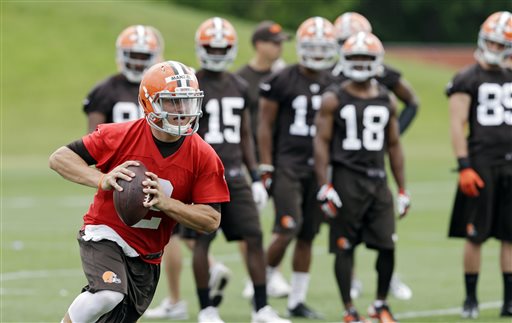 In this June 11, 2014, file photo, Cleveland Browns quarterback Johnny Manziel runs the ball during NFL football minicamp at the team’s facility in Berea, Ohio. With LeBron James return, Johnny Football might not be the top star in Cleveland, but Manziel will still get plenty of attention for what he does on and off the field this summer. (AP Photo/Mark Duncan, File)

The popular rookie quarterback, who will begin his first training camp this week as a backup, had the league’s top-selling jersey since April 1. The league said Monday that Manziel’s No. 2 outsold all others from April 1 to July 17 on NFLShop.com.

The league did not say how many Manziel jerseys — priced at $99.95 a pop — sold during the period. More than a few seemed to have been purchased in the Cleveland area, where brown or white Manziel jerseys can be found all over the city.

The Browns drafted the former Texas A&M star, who earned his Johnny Football nickname with his playmaking ability, with the No. 22 overall pick on May 8. He’s scheduled to report to training camp on Wednesday and will battle with Brian Hoyer to be Cleveland’s starter.