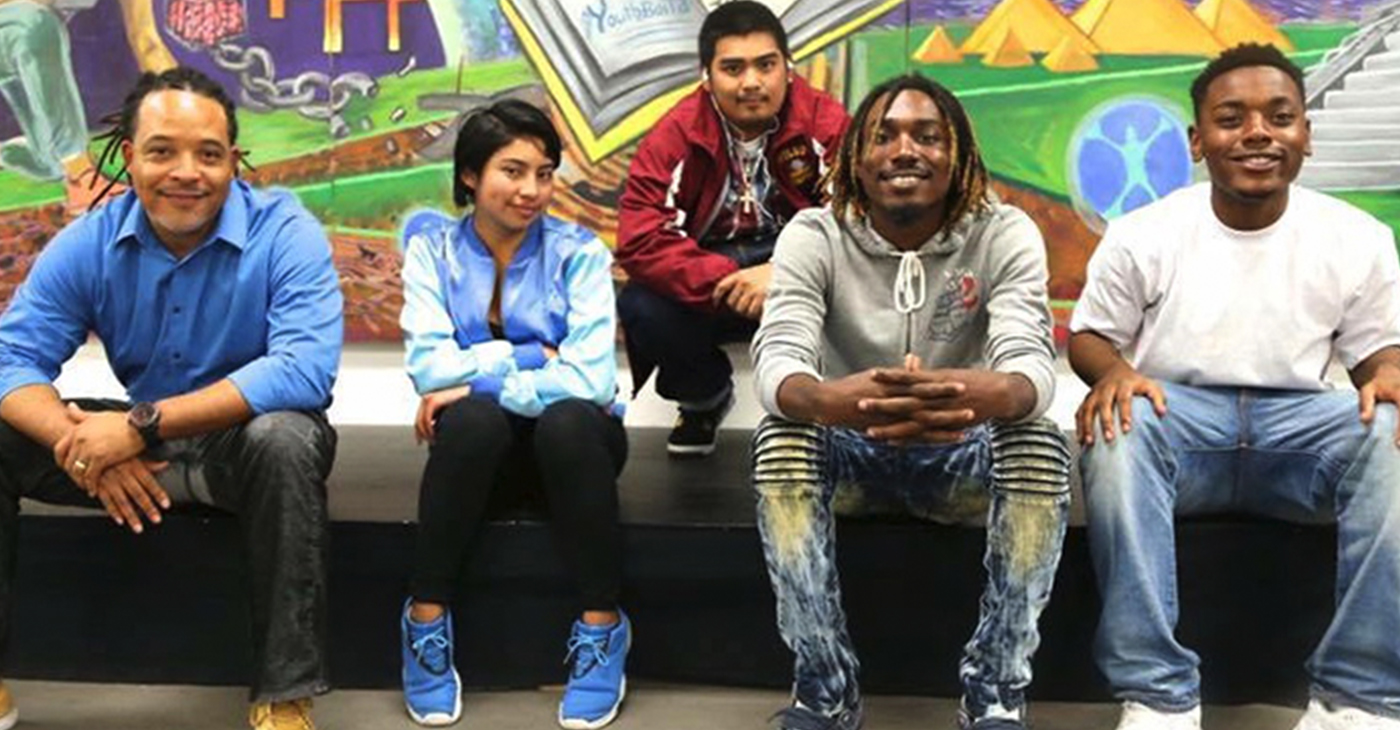 For Harry Grammer, founder and president of New Earth, working with system-entangled youth is not just a job, but a calling.

It is a struggle that Grammer knows all too well.

At 16, he was arrested and sentenced to five years of juvenile probation. At 18 he was a teen father struggling to provide for himself and his family. By the time he entered his 20s, however, his life had turned around and he was ready to pay it forward and make life better for youth in his community.

“I understood the role that spoken word and music had in my healing, and making sure that I was able to express myself, and work through my issues, and I knew that it could be the saving grace for these kids,” Grammer said.

In 2004, New Earth introduced FLOW at Camp Gonzales and since then the program has touched the lives of more than 1,800 young people each year in probation camps, group homes, placements and juvenile halls throughout Los Angeles and Orange County.

“When I first started entering the juvenile halls, I realized how hungry these kids were for music,” Grammer said. “Think about it, kids are always listening to music…on their headphones … on their phones … and they now find themselves in a place where there is no music and here we come. It is like bringing water to the desert.”

It hasn’t been easy, though.

“For the longest time it was just us seven days a week, eight hours a day in these centers trying to keep these kids spirits up, trying to give these kids hope,” he said.

“At any given day there are 3,000 youth locked up, and statistics from 2009 show that in Los Angeles County there is an 86 percent recidivism rate for these youth. … And they are being sent back for minor infractions,” Grammer said. “I once met a young man who was given 6 months in jail because one of the stipulations for his probation was that he keep a 2.0 GPA and he fell below that. … We have got to do better by our kids.”

In addition to FLOW, New Earth offers case management, outdoor excursions, a music studio and vocational education in which youths have the opportunity to receive their high school diploma and online degrees at the New Earth Arts and Leadership Center, opened in 2015.

“We want to make sure that our youth are making a viable, sustainable living wage,” Grammer said.

To ensure this, the organization works to impart youth with the soft skills they need to be employable, partnering with Microsoft to teach youth hard digital skills and LA Kitchen and LA Trade Technical College to teach youth culinary and construction skills. The plan is to match participants with jobs as soon as they complete their courses.

Additionally, Grammer, who in recent years has been named a CNN hero and a 2018 Obama Foundation Fellow, has laid the groundwork for the 2019 transformation of Camp Gonzales Youth Detention Center into a state-of-the-art vocational center that will focus on independence and self-sustainability instead of incarceration.

“I feel like I have come full circle,” Grammer said. “To be able to come back to Camp Gonzales where it all started and see that transformed … it’s an opportunity for us to become a model for the nation.”

Grammer is grateful for all the support that New Earth has received from the community but admits that his organization needs more help. The organization is currently in a building that they have outgrown and need more funding for general operations and capacity building.

“I have the most amazing people working with me, I just cannot say enough about them, but we need more support for our programs, we need more people to know about the work,” Grammer said. “We are headed towards making a large impact. We see ourselves as a guiding light in the darkness enveloping this nation.”