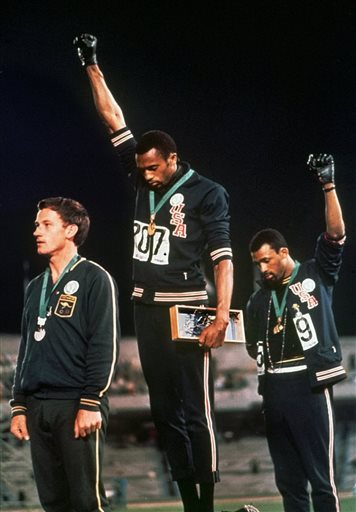 In this Oct. 16, 1968, file photo, U.S. athletes Tommie Smith, center, and John Carlos stare downward while gesturing skyward during the playing of the Star Spangled Banner after Smith received the gold and Carlos the bronze for the 200 meter run at the Summer Olympic Games in Mexico City. Australian silver medalist Peter Norman is at left. Time will tell whether the “hands-up” gesture that five St. Louis Rams made during pregame introductions on Sunday, Nov. 30, 2014, will leave a lasting memory or simply go down as a come-and-go moment in the age of the 24-hour news cycle. Either way, it certainly isn’t the first time high-profile athletes have used their platform to make political statements. (AP Photo/File)

The “Hands-up. Don’t shoot!” gesture that five St. Louis Rams made during pregame wasn’t the first time athletes have used their platform to make political statements.

A short list of some of the most famous moments:

—Tommie Smith and John Carlos: The most iconic moment of them all. American sprinters Smith and Carlos took to the medal stand at the Mexico City Olympics in 1968 and raised their gloved fists — the Black Power salute. It was a time of enormous racial tension in the United States, and the gesture was front-page news in hundreds of newspapers. The athletes were booed out of the stadium and expelled from the Olympics.

—Obama Salute: Broncos receiver Brandon Marshall started to pull a black-and-white glove out of his shirt, designed to honor Barack Obama shortly after he was elected President in 2008. But a teammate stopped him, fearing he might draw a penalty.

—Tebow Eyeblack: Not so much a political expression as a religious one. While at Florida, Tim Tebow liked to etch bible chapters into his eyeblack, a practice he couldn’t continue in the NFL, which banned such expressions.

—Los Suns: In response to the passing of a state law many saw as anti-Hispanic, the owner of the Phoenix Suns had his team wear their jerseys that said “Los Suns” at a home game in 2010.

—LeBron, Heat and hoodies: LeBron James and Dwyane Wade got the Heat to pose for a team picture with all the players wearing hoodies, the same thing Trayvon Martin was wearing when he was shot to death in 2012.

— “Quenelle”: Soccer player Nicolas Anelka was banned for five games for performing a gesture known in France as a “quenelle” — described as an inverted Nazi salute — during a game last year. He was later fired by his team, West Bromwich. Other soccer players, including Paolo Di Canio and Giorgos Katidis, have also been suspended for fascist salutes.

—The Rams: During pregame introductions Sunday, Tavon Austin and Kenny Britt were joined by Jared Cook, Stedman Bailey and Chris Givens, all of whom raised their hands in a show of support for protesters in Ferguson, Missouri — a suburb of St. Louis. Last Monday, a grand jury there decided not to charge the white officer who fatally shot Michael Brown, who was black. Some witnesses said Brown had his hands up before being shot, although others disputed that. Brown had been unarmed. “I don’t want the people in the community to feel like we turned a blind eye to it,” Britt said. “What would I like to see happen? Change in America.”