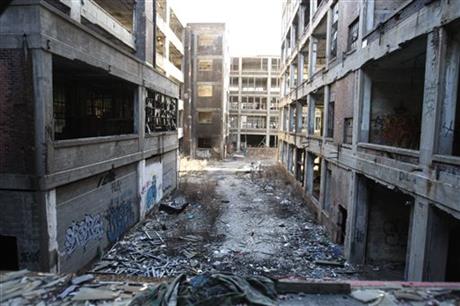 (Daily Mail) – These eerie pictures shows some of the nearly 40,000 abandoned or empty buildings in Detroit, as they wait to be either demolished or renovated as the city nears the completion of its bankruptcy proceedings.

Thousands of shops, homes and offices sit empty and rotting on Detroit’s streets, as well as two beautiful former synagogues – one of which had become a theatre.

Many of the dilapidated buildings are now covered with graffiti, while others are boarded up, with the sad signs of once bustling local stores fading in the sun.

The Michigan city filed for chapter nine bankruptcy on July 18 last year, becoming the largest municipal bankruptcy by debt in U.S. history. This debt is estimated at around $18-20 billion.