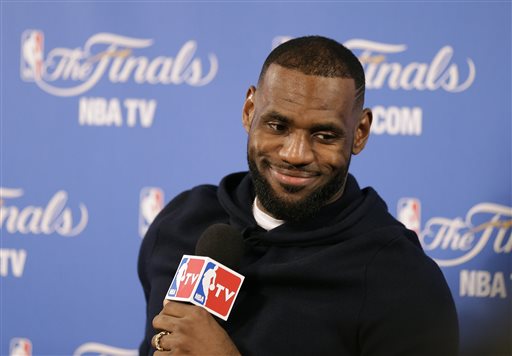 In this June 7, 2015, file photo, Cleveland Cavaliers forward LeBron James smiles during a news conference after Game 2 of basketball’s NBA Finals in Oakland, Calif. Two people familiar with the negotiations say LeBron James has agreed to a one-year, $23 million contract with the Cavaliers for next season. (AP Photo/Ben Margot, File)

CLEVELAND (AP) — The Cavaliers can exhale for another year. They’ve got LeBron James’ signature on a contract.

The four-time MVP, who brought the Cavs back from irrelevancy to the brink of an NBA championship this season, signed his two-year, $47 million deal on Friday. The commitment allows him to maintain financial flexibility and keeps pressure on Cleveland’s front office to keep building.

The deal includes a player option for the 2016-17 season. He finalized the agreement shortly before hosting a private screening for a new movie in which he has a supporting role.

He’s the unquestioned star with the Cavs, who are thrilled he’ll be back and expect him to complete his career wearing wine and gold.

“LeBron’s re-signing today is a reflection and continuation of his strong, personal commitment to help deliver championships to Northeast Ohio and Cavs fans everywhere,” general manager David Griffin. “We share this deep level of commitment with him. His impact upon this team, his community and the game are impossible to overstate and we look forward to continuing on our mission together.”

James’ signing comes a day before the one-year anniversary of his return to Cleveland after spending four seasons in Miami.

The 30-year-old has indicated he will finish playing career with the Cavs, who went from being a lottery team to Eastern Conference champions in James’ first season back.

James will likely opt out of his contract again next summer so he can cash in when the league’s salary cap jumps thanks to a new $24 billion TV deal.

James averaged 25.3 points, 7.4 assists and 6.0 rebounds in 69 regular-season games. However, his biggest contributions may have come off the floor as his leadership helped instill a belief in a Cleveland team that dropped to the bottom of the league during the four years he was with the Heat.

He scored in double figures in all 69 games, increasing his consecutive double-digit scoring streak to 641 — third-longest in history.

The 11-time All-Star finished third in the MVP voting, a slight that seemed to motivate him during the postseason.

James saved his best for last, dominating the finals but failing to lead the Cavs to a championship as they were beaten in six games by the Golden State Warriors. James averaged 35.8 points, 13.3 rebounds and 8.8 assists in the six games, the best statistical performance in finals history.