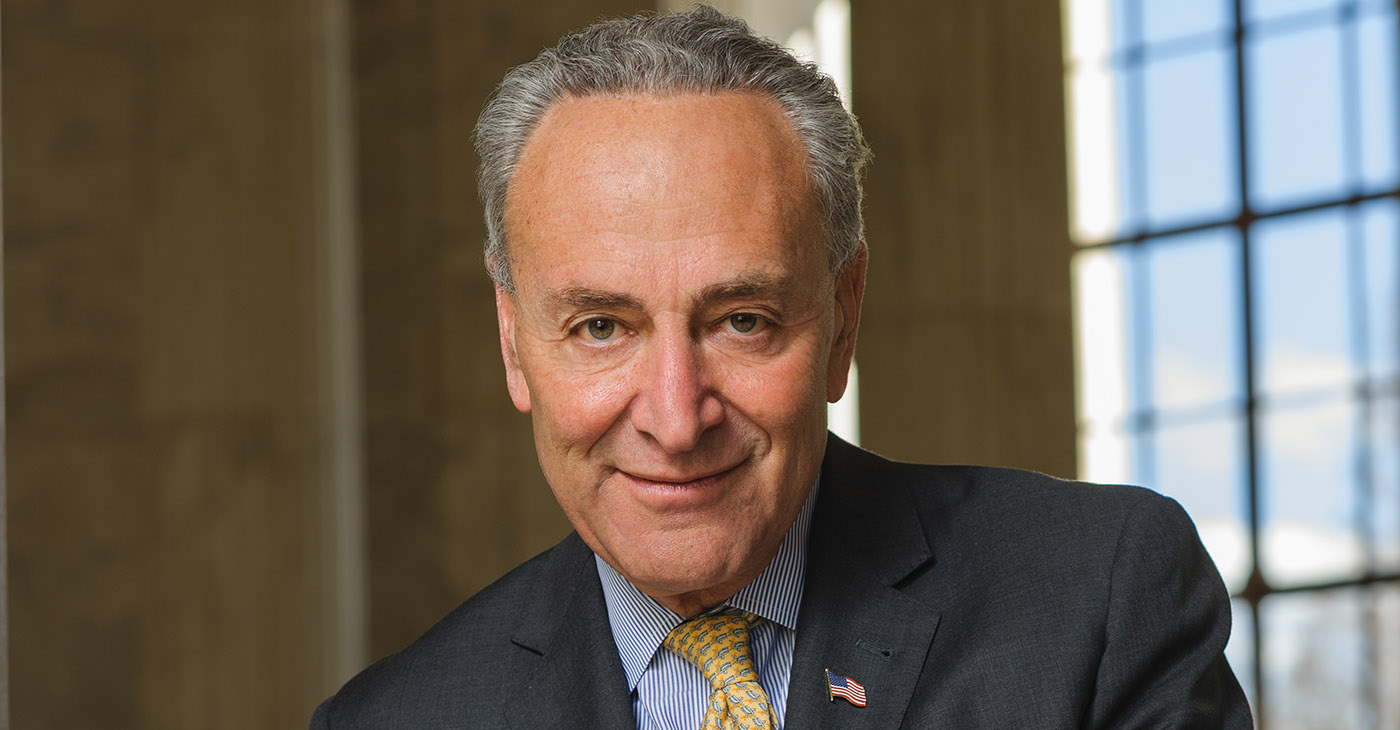 A Transformative Plan To Reduce Number Of Carbon-Emitting Cars On The Road, Create Jobs, And Accelerate Transition Net-Zero Carbon Emissions

Washington, D.C. – Senate Democratic Leader Chuck Schumer (D-NY), along with Democratic Policy and Communications Committee Chairwoman Debbie Stabenow (D-MI), Senate Committee on Banking, Housing, and Urban Affairs Ranking Member Sherrod Brown (D-OH), and Senator Jeff Merkley (D-OR), a member of the Senate Democrats’ Special Committee on the Climate Crisis, today unveiled the Clean Cars For America Climate Proposal, a bold new initiative to accelerate the transition to net-zero carbon emissions by mid-century—a target scientists say we must reach to avoid the most devastating effects of climate change, but are currently off track to meet—by making clean cars and charging infrastructure accessible and affordable to all Americans.

Leader Schumer’s Clean Cars for America proposal has a broad coalition of support, from such stakeholders as leading environmental groups like the Sierra Club, the NRDC, and the League of Conservation Voters, as well as labor unions like the United Auto Workers and the International Brotherhood of Electrical Workers, and large auto companies like Ford and General Motors. The initiative would incentivize the transition to clean vehicles by providing significant discounts for clean vehicles when trading in a gas-powered vehicle, establishing a new grant program to states and localities to ensure all Americans have access to charging infrastructure, and providing robust  incentives for manufacturers to build new factories or re-tool existing factories. The plan would result in 63 million fewer carbon-emitting cars. The plan is estimated to create tens of thousands of good-paying jobs in the United States.

The Clean Cars For America Climate Initiative would accelerate the critical transition to net-zero carbon emissions by mid-century by making electric vehicles and charging infrastructure accessible to all Americans, regardless of where they live and work, and would firmly establish the United States as the global leader in electric vehicle and battery manufacturing.

“Today I am announcing a bold new plan designed to reduce the number of carbon-emitting cars on the road, create thousands of good-paying jobs, and accelerate the transition to net-zero carbon emissions by mid-century—a target scientists say we must reach to avoid the most devastating effects of climate change,” said Senate Democratic Leader Chuck Schumer. “This proposal to bring clean cars to all of America will be a key component of the far-reaching climate legislation from Senate Democrats, and I’m proud it has a broad coalition of support from a diverse coalition of environmental, labor, and auto leaders. This proposal takes bold steps to confront the climate crisis, protect our planet, create tens of thousands of good-paying middle-class jobs, and would position the U.S. to lead the world in clean auto manufacturing.”

“Michigan automakers and workers are the best in the world and are leading the way in developing cutting-edge electric vehicles,” said Senator Stabenow. “We need a dramatic expansion in our electric charging infrastructure to accelerate the electric vehicle fleet of the future. These investments will help create new jobs and reduce carbon pollution as we combat the climate crisis.”

“American workers are the best in the world, and with a real investment in new auto technology, can make the safest, the cleanest, the most reliable and the most fuel efficient cars in the world,” said Senator Brown. “In Ohio, we’ve seen too many autoworkers – in Lordstown, Mansfield and throughout the state—see their jobs shift overseas when companies decide to invest in new technology. This plan would ensure we build the next generation of clean cars in America and bolster our economy while also supporting American autoworkers and preventing more jobs from moving overseas.”

“At a time when the effects of climate chaos are all around us in the form of out-of-control wildfires, extreme droughts, and deadly hurricanes, families across America are looking for ways to reduce the carbon emissions that are driving the crisis,” said Senator Merkley. “One of the best ways is to trade in gas-powered cars for plug-in cars. This legislation will help families make that trade—a switch that will help save our planet.”

“With communities around the country suffering the ravages of climate change and communities of color and low-income communities bearing the brunt of those impacts and health effects of air pollution, Democratic Leader Schumer’s proposal is a big and welcome piece of a needed solution,” said Tiernan Sittenfeld, Senior Vice President of Government Affairs at the League of Conservation Voters (LCV). “This comes at a critical time and stands in stark contrast with the Trump Administration’s efforts to roll back clean car standards and stand in the way of American innovation. We need both strong standards for tailpipe emissions from the EPA and incentives like these to clean up our transportation sector.”

“The only way we can tackle the climate crisis is by leaving no one behind — that includes workers and those most impacted by pollution. Leader Schumer’s Clean Cars for America legislation boldly addresses pollution from the transportation sector while continuing to grow the booming clean energy economy, and the Sierra Club is proud to support it,” said Gina Coplon-Newfield, Director of Sierra Club’s Clean Transportation for All campaign.

“This bold measure would accelerate the transition to clean electric vehicles and help ensure that American workers play a central part in building them,” said Luke Tonachel, Director of Clean Vehicles and Fuels at the Natural Resources Defense Council. “Coupled with stronger clean car standards, this proposal would help deliver the vehicles we need to cut drivers’ fuel costs, clean our air and address the dangers of climate change.”

“In order to confront the climate crisis, we must urgently deploy cleaner electric vehicles. We support Senator Schumer’s efforts to help more people, particularly low- and medium-income families, make the switch from conventional vehicles to electric vehicles and to ensure that the US maintains a leadership role in this transition. We look forward to working with him further on this proposal,” said Michelle Robinson, Director of Clean Transportation Program at the Union of Concerned Scientists.

“Reducing carbon emissions in the United States and around the world is not only a challenge, but a great opportunity to modernize our nation’s infrastructure, reinvigorate domestic manufacturing, and create hundreds of thousands of well-paying, family-supporting union jobs. The International Brotherhood of Electrical Workers (IBEW), the largest energy union in the world, supports Leader Schumer’s plan to reduce carbon emissions in the transportation sector by investing in American workers and directing federal resources that will make the United States the global leader in electric vehicle infrastructure and EV manufacturing,” said Lonnie Stephenson, International President from the International Brotherhood of Electric Workers.

“Over the past month we’ve seen autoworkers nationwide stand up to ensure that the vehicles of the future are built in America and that  manufacturing once again provides good-paying jobs,” said Zoe Lipman, Director of the Vehicles and Advanced Transportation Program at the BlueGreen Alliance. “We cannot rebuild prosperity if we fall behind the rest of the world in building the technologies of the future. That’s why Congress needs to act—through measures like Senator Schumer’s proposed Clean Cars for America package—on an agenda that makes leadership and investment in advanced and electric vehicles, technology, manufacturing, and good jobs in America a priority.”

“We appreciate Leader Schumer’s efforts to drive America toward a more electrified, low carbon future,” said Curt Magleby, Vice President, U.S. Government Relations, Ford Motor Company. “Ford is investing $11.5 billion to grow our electrified vehicle portfolio, which includes iconic models our customers know and love. Just last week we announced that our all-electric vehicle customers will have access to the largest public charging network in the U.S.  We look forward to working in a bipartisan way to help shape this proposal.”

“General Motors believes in an all-electric, zero-emissions future. Driving towards that vision, we will continue investing in manufacturing and dedicating significant resources to bolster infrastructure here in the United States. We appreciate the leadership of Senator Schumer and his efforts to advance electrification through much-needed infrastructure investments, consumer incentives and promotion of American electric vehicle manufacturing,” said Liz Reicherts, Vice President, External Affairs

There are three major components to Leader Schumer’s proposal:

This announcement follows a number of Democratic efforts to meaningfully confront the climate change crisis, including Senate Democrats’ forced vote to repeal the Trump administration’s “Affordable Clean Energy Rule,” the administration’s latest attempt to significantly weaken important carbon emissions standards for power plants, a pledge from Leader Schumer to invest in climate in any infrastructure bill, and the establishment of the Senate Democrats’ Special Committee on the Climate Crisis, chaired by Senator Brian Schatz (D-HI).