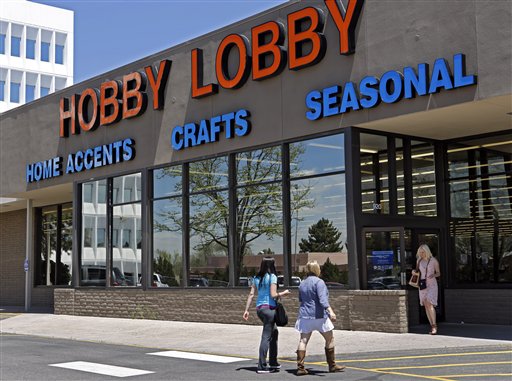 In this May 22, 2013, customers enter and exit a Hobby Lobby store in Denver. The Supreme Court is poised to deliver its verdict in a case that weighs the religious rights of employers and the right of women to the birth control of their choice. (AP Photo/Ed Andrieski, File)

(Los Angeles Times) – The Supreme Court’s controversial Hobby Lobby decision has thrust a once-little-known boutique law firm into the center of a growing conservative movement to make faith-based exemptions as potent a legal tool as free speech has been for liberals.

The tiny Becket Fund for Religious Liberty was the legal power behind the high court’s decision last month to extend religious rights to corporations for the first time. Before that, the Washington firm’s attorneys successfully defended a church school’s religious right to be exempted from federal antidiscrimination rules and, in another case, even persuaded the progressive U.S. 9th Circuit Court of Appeals to keep “under God” in school recitations of the Pledge of Allegiance.

With just a dozen full-time attorneys, the fund’s string of high-court successes is earning it a reputation in legal circles as a powerhouse, though its leaders downplay talk about the firm’s growing influence.

“We had a good laugh,” said Kristina Arriaga, the firm’s executive director, when asked about the nationwide attention that followed the Supreme Court’s June 30 Hobby Lobby ruling.

Church a Haven for Muslims in Gaza