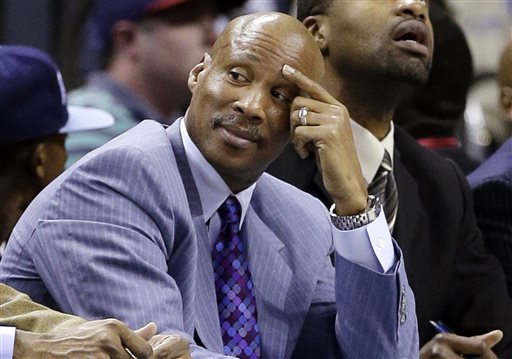 In this April 17, 2013, file photo, then-Cleveland Cavaliers coach Byron Scott watches an NBA basketball game in Charlotte, N.C. Scott, who won three NBA titles as a shooting guard for the Lakers, told KCBS-TV he will take over the club, which hasn’t had a coach since Mike D’Antoni resigned April 30. (AP Photo/Chuck Burton, File)

The Lakers finally made the long-anticipated announcement in a news release. Scott will be introduced at a news conference Tuesday at the Lakers’ training complex.

Scott told reporters last weekend he had been hired by the Lakers, who have been without a coach since Mike D’Antoni resigned April 30. Scott is the 25th head coach in the 16-time NBA champions’ franchise history.

“We’re proud to welcome Byron back to the Lakers family as our next head coach,” Kupchak said. “Byron has proven himself at the highest levels of the game as both a player and a coach in his almost 30 years of NBA experience. His leadership skills and track record for success make him the ideal person to lead this franchise forward.”

Scott is 416-521 as a head coach for New Jersey, New Orleans and Cleveland, reaching two NBA Finals with the Nets. He has won three division titles, and he was the NBA’s coach of the year in 2008.

Scott also was a shooting guard for the Lakers for 11 seasons, playing alongside Magic Johnson during the Showtime era. He was a teammate of Lakers star Kobe Bryant during his final NBA season, and Bryant has endorsed Scott for his new job.

“I am ecstatic to once again be a Laker and to have the opportunity to work alongside Mitch and the Buss family,” Scott said. “I know firsthand what it takes to bring a championship to this city, and as someone who both grew up in L.A. and played the majority of my career here, I know how passionate and dedicated our fans are. I will give everything I have to fulfill the championship expectations that our supporters have for us, and that we have for ourselves.”

Scott spent last season as an analyst on the Lakers’ television network, watching their disintegration during a 55-loss season, the most in franchise history. Bryant played just six games last season.

The Lakers interviewed several coaching candidates over the past three months, including Lionel Hollins and George Karl. Scott has been widely considered the front-runner for the job since early summer, but Kupchak and Buss appeared to be more focused on the NBA draft and free agency than their current team’s leadership.

NBA, Clippers Eager for Sterling Out, Ballmer In